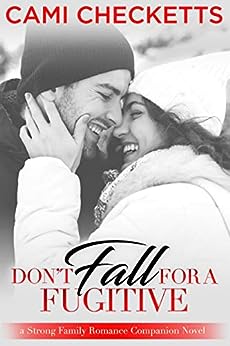 A woman on the run … an appealing millionaire promising to shelter her.
Hazel Longhurst flies to America for Christmas hoping to photograph the beauty of Western mountains, learn to ski, and maybe find her an American cowboy. When she witnesses a murder, she runs, right into Heath Strong’s appealing arms.
Heath Strong has plenty of reasons to shelter and protect Hazel, but what about all the reasons he can’t resist her appealing accent, positive attitude, and adorable smile? Can he put his family at risk loving a fugitive or should he turn her over to authorities who might be on a mob family’s paycheck?
Will they fall in love for Christmas or be torn apart by the vindictive man framing her?

This story starts out with the danger clearly shown.  It makes for a good start.  Then things slow down a bit for a while.  A lot of that has to do with Hazel as she is being hidden by Heath and we get to know his family.  Hazel only gets to see snippets of his family as she is hiding. That part is sweet and so is Hazel getting to know Heath.  Don't worry though, the danger to Hazel is still out there and there will be an uptick of it towards the end.

Hazel has a fair amount of British slang which I felt might have been a bit overdone.  And even her mother says she has a motor mouth.  Heath is an overworked businessman who is honorable all the way through.  It doesn't take long for the two of them to be strongly attracted to each other.  It's a clean romance though, just in case you were wondering.

Austin, the Strong family youngest brother was ten years old and added quite a bit of fun and humor.

Everything comes to a good conclusion and a H.E.A.