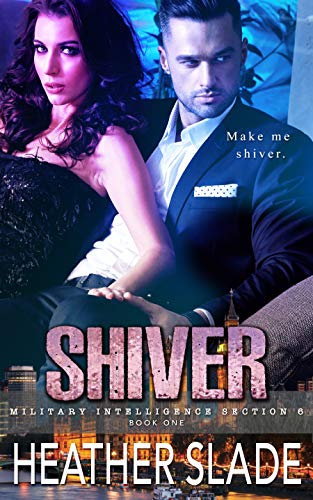 While each book in the MI6 series is a standalone with its own HEA, they may be more enjoyable read in order.

An M16 agent’s in love with the wrong woman.
A Russian assassin’s harboring secrets.
Cold and calculating, guaranteed to make you SHIVER.

SHIVER
I put all our lives on the line,
Mine, my team, and anyone trying to stop me,
From protecting her,
And releasing her.

I may be the Marquess of Wells,
With a dying father,
But that doesn’t hinder me from what I want,
And I want her.

LOSHA
Secrets.
As a Russian assassin,
I am riddled with them,
Especially now with a ten-million-dollar bounty,
On my head.

They want me dead.
He wants me in his bed,
Either way, I’m going to suffer,
If the secrets get out.
But there’s no denying,
The marquess makes me SHIVER with desire.  AMAZON LINK

I have to admit that the beautiful eBook cover drew me in.  And then so did the book information.  I wasn't disappointed because this was a pretty good story.

I liked Orina's best friend, Zary.  The two "girls" have been besties since their teens in some dicey situations.   Even when they had to be apart later on when Orina ("Losha") was hiding.  When they reconnect, it's still with a sense of strong friendship and loyalty.

The only thing that caught me off balance a few times was when the story swung back into Orina and Shiver's past.  All of a sudden I found myself reading about how they met or some interaction and then realize "oh" this is a different time. "

There is  plenty of action and danger especially towards the end.  It also has a H.E.A. and a good Epilogue.

It also caused me to be interested in some of the other stories in the series.  Like the one about "Pinch".