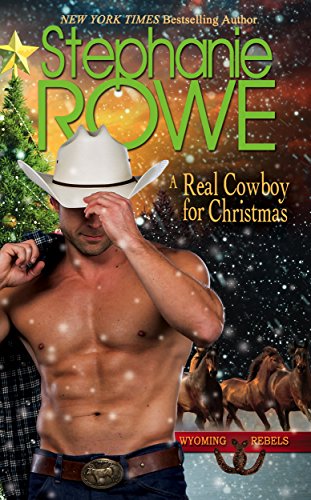 What happens when a single mom falls for the best friend of the brother who doesn't know she exists? An unexpectedly delightful cowboy holiday romance.

When Sheriff Dane Wilson rescues a sassy, single mom and her daughter on a runaway Christmas hayride, he falls hard for the irreverent duo. But when Dane discovers the spunky school teacher has a secret connection to his best friend, his protective nature kicks in.

After a wintry first kiss raises the stakes, Dane has to decide whose side he's on.

Only a deathbed promise would send Jaimi Hamilton to Rogue Valley for Christmas to track down her brothers, the nine Stockton cowboys who don't know about her. She has no intention of actually introducing herself to them…but her irreverent daughter and a too-sexy-for-his-own-good sheriff have other plans.

What a great emotional story.  Good main characters make for a heart-warming story.   Jaimi and her daughter, Emily have quite the funny relationship. It made me laugh a lot.  Especially when it came to Emily talking about how her Grandma always said that Jaimi had to "smash her inner wimp".  And that  Jaimi needed Emily's help to make sure that happens. After all Grams said so.  And I loved the humorous pinky swear that the three of them had come up with to be troublemakers. It wasn't a bad thing just a vow to live boldly. Now it was just the two of them but the tradition continues.

There is plenty of other really good people in the story.  Because after all, nine brothers AND some of their families.

The romance was sweet, funny and Dane was such a good guy who was so patient with her.

A H.E.A. makes it all come together to make for a good Christmas story.  Well, in fact a good story for any time.

There is also several excerpts of stories about other  brothers.