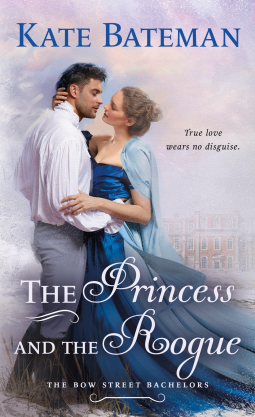 A princess in disguise is forced to live with a rogue in order to protect her from danger in this fun, sexy regency romance from Kate Bateman.

In The Princess and the Rogue, Bow Street agent Sebastien Wolff, Earl of Mowbray, doesn’t believe in love—until a passionate kiss with a beautiful stranger in a brothel forces him to reconsider. When the mysterious woman is linked to an intrigue involving a missing Russian princess, however, Seb realizes her air of innocence was too good to be true.

Princess Anastasia Denisova has been hiding in London as plain ‘Anna Brown’. With a dangerous traitor hot on her trail, her best option is to accept Wolff’s offer of protection—and accommodation—at his gambling hell. But living in such close quarters, and aiding Wolff in his Bow Street cases, fans the flames of their mutual attraction. If Anya’s true identity is revealed, does their romance stand a chance? Could a princess ever marry a rogue?  AMAZON LINK
3 STARS
For me this book was just okay.  Granted it did have it's moments.  Some of those had to do with the spunky interchanges between Anya and Seb.   Both of them had lives through some interesting times; dangerous ones as well.
Anya was clever and resourceful and that has kept her steps ahead of the vile Count who is after her.
There is also some good secondary people in the story.  That includes Anya's close friend, Elizaveta who is  also on the run with her.
Charlotte added some flavor to the story as did the Dreaded Dowager Dorothea.
There was plenty of Russian fairy-tales, traditions, and superstitions.  There is also dangers, attempted kidnappings and rescues.
A surprise twist is waiting towards the end of the book.
I'm glad that there was a H.E.A. but I just wish I had liked it more.   Maybe others will enjoy it more.


"I voluntarily read and reviewed an advanced copy of this book. All thoughts and opinions are my own.”
Posted by Flame at 9:09 PM