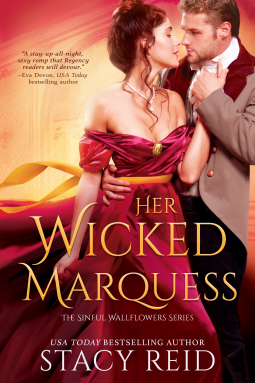 Miss Maryann Fitzwilliam is too witty and bookish for her own good. No gentleman of the ton will marry her, so her parents arrange for her to wed a man old enough to be her father. But Maryann is ready to use those wits to turn herself into a sinful wallflower.

When the scandal sheet reports a sighting of Nicolas St. Ives, the Marquess of Rothbury, climbing out the chamber windows of a house party, Maryann does the unthinkable. She anonymously claims that the bedchamber belonged to none other than Miss Fitzwilliam, tarnishing her own reputation—and chances of the dastardly union her family secured for her. Now she just needs to convince the marquess to keep his silence.

Turns out Nicolas allows for the scandal to perpetuate for his own reasons… But when Maryann’s parents hold fast to their arranged marriage plan, it’ll take a scandal of epic proportions for these two to get out of this together.  AMAZON LINK

I loved this story.  Both Maryann and Nicolas were great main characters; interesting and with great depth.  Their emotions clearly shown through even though there were times when Nicolas showed a poked face.  As time goes on, it becomes clear at least to Maryann that Nicolas has two faces.  Both the dandy and the dangerous man that he can be. She begins to see even more than that though. Nicolas has a thirst for revenge that has driven him for ten years.  Five men committed a heinous crime and because of their family has a high position in society, no justice has been served.   Nicolas tried every avenue of the law that he could without any success.  So now it has been his life's mission to mete it out himself.   And he has been hugely successful on it. He was still looking for The Wolf and the Black Dahlia.   We follow his efforts as the story goes on. That alone provided quite a few twists and turns all on its own.   Maryann was an unrecognized gem and she was a whole lot of fun with her sharp wit, her sense of humor, and her clever mind and mouth.  She was also clever in her efforts to get rid the man that her family is trying to force her into marrying.   But no one is listening to her wishes so the rebel in her rises up and leads her into some interesting situations.  It kept me involved all the way though.

I liked that the story  and the friendship between Maryann and Nicolas was also well developed before anything HOT happened between them.  And it does get steamy much further in the book.

The story has a savage twist towards the ending of the book with a huge surprise following. It also leads up to a more dangerous confrontation that was  like a 1,2,3 punch.

There is a H.E.A. which I enjoyed along with a sweet Epilogue that tied up some loose ends when it came to a couple other people as well.