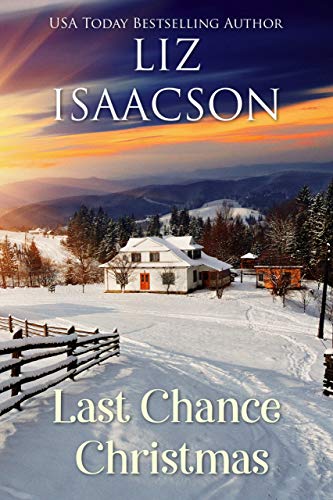 She's tired of having her heart broken by cowboys. He waited too long to ask her out. Can Lance fix things quickly, or will Amber leave Last Chance Ranch before he can tell her how he feels?

Amber Haws has never had a problem saying yes to a date. She's been out with lots of men in the time she's been at Last Chance Ranch, but she's finally gotten her heart broken one too many times.

She swears off cowboys right to the one who's been watching her for months now. Lance Longcomb followed the advice of his friends and waited to ask her out after each of Amber's break-ups. But now she's done with cowboys?

Armed with her favorite doughnuts, Lance shows up to ask her to give cowboys—and him—one last chance. As their relationships grows and deepens, Amber realizes that she might have been the problem all this time...

When a new job opportunity comes up, Amber is faced with a tough decision: Stay at Last Chance Ranch and have dozens of cowboy Chrismases with Lance, or leave town to follow her dreams?

Lance can't leave the ranch, not when he's just moved his mother in next door. He thinks maybe his and Amber's relationship will simply require too much sacrifice, from both of them. Will Lance and Amber find a path that leads to each other? Or will this be their last cowboy Christmas together?
AMAZON LINK
4 STARS
I found this to be a sweet, emotional story with faith and good main characters.  And the supporting people were pretty good too.
It didn't take long for me to be pulling for Lance to find his forever after with Amber.  He was just such a great guy, who was always there for anyone who needed something. And he really did care about people.  He also paid attention to what was important to Amber.
Amber was so afraid to trust her feelings because she had been wrong time and again when it came to men.  This caused her to be wishy-washy with Lance.  That made me want to slap her in the head one even though I got  to understand some of her issues had helped make her that way.   She had a sister and mother who made her feel invisible which had her questioning her worth.
There is also a well done H.E.A. that I liked.
Posted by Flame at 5:37 PM