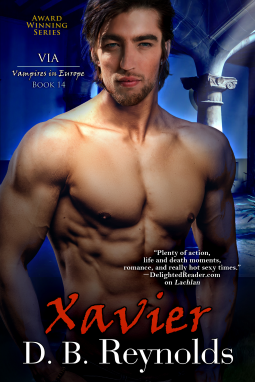 Barcelona--exquisite architecture, masterful artists, and just down the coast, an ancient fortress where an old and powerful vampire lives. . .and rules all of Spain.

Tall, dark, and deadly, vampire Xavier Prospero Flores waded through blood to destroy his enemies and reach the pinnacle of vampire society--Vampire Lord. He has only one regret in his long life, and that’s the day he rejected the advances of Layla Casales. She’d been too innocent, too naïve, and far too young. But she’d also been his.

Layla Casales was only nineteen when she left Spain, brokenhearted and humiliated by Xavier’s rejection. But now, ten years later, the ties of family are pulling her back, not only to Spain, but to Xavier’s fortress. Her father, the vampire lord’s military commander, is critically ill. Layla has spent years fighting on battlefields around the world, so when her father asks her to come home, she can’t say no.

Though Xavier’s rule began on the ashes of his enemies, it’s not vampires trying to kill him now--it’s humans. He needs to eliminate his enemy before more of his people die. Layla arrives just in time to help, but while she came for her father, the minute she and Xav ier see each other, desire burns as hotly as if they’d never been apart. Xavier isn’t going to let her go this time. But before they can rediscover the love they walked away from, they must first keep each other alive. AMAZON LINK

I had mixed feelings on this one.  It had some good moments and at other times it seemed pretty slow.

It had good main characters and great world building.  At times, it felt like things got caught up too much in the history/past.

There definitely is a strong emotional, and sexual connection between Layla and Xavier.

Layla also has a strong group of team members that she has led after she left Spain.   They have been through war in many different places.  It developed over time until she became their leader in their own specialized force.   They definitely have been their for each other through thick and thin.

However, there were times that it seems like it was slow before there is any action.   It did have the quality that you never knew when or how the attacks would happen, so there was that.

Things do get taken care of, along with some sexual scenes, a bit of a twist about the bad guy and a H.E.A.