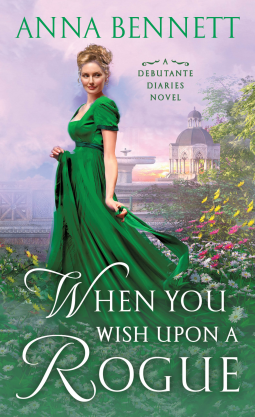 Once upon a time in Anna Bennett's When You Wish Upon a Rogue--first in The Debutante Diaries series--three young ladies vowed to record their first London seasons and to fill in the gaps of their educations.
She knows what she wants.
Miss Sophie Kendall is happiest arranging the secret meetings of the Debutante Underground, a group of women who come together to discuss the weekly advice column The Debutante’s Revenge. What makes Sophie most unhappy is her impending march down the aisle to a man she does not love. But her family’s finances are in increasingly dire straits.
He makes an offer she can’t refuse.
Henry Reese, Earl of Warshire, hasn’t slept in weeks. Desperate to escape his manor house and its haunting memories, he heads for one of his abandoned London properties. There he meets a beautiful, intriguing woman—trespassing. Reese is far less interested in Sophie’s search for a secret meeting spot than he is in her surprising ability to soothe his demons. So he strikes a bargain with her: his shop in exchange for spending one night a week with him.
Is this love for real—or just a dream?
Sophie never expected this to happen. But she cannot deny the fire Reese sparks in her—and soon their shared desire burns bright. Sophie is irrevocably promised to another. But maybe these two ill-fated lovers can find a way to risk it all—all the way to happily ever after…AMAZON LINK
3 STARS


I had such high hopes for this book  mainly because of the unusual setting mentioned in the book information.  However, for me it just didn't pull me in as much as I had hoped it would.
On the plus side -both of the main characters had depth and there were good descriptions of their surroundings. The gardens and property at Reese's home being one of them.  There are also some tender moments between Reese and Sophie as well.  Sophie is a rule maker but not much of a rule breaker.  She's never really felt the need until she met Reese.  She not only has a couple of rules for the secret society that she helped formed but also sets them up for her meetings with Reese.
The risks they took with Sophie's reputation though after awhile was kind of hard to believe and often yanked me out of the story.
Reese  is an honorable man but he doesn't think that he desires anything good because of all of the things that haunt him.  So there is plenty of angst and emotions in that area.   There is also the emotion of friendship that builds between the main characters, although Reese fights against it.
Sophie does have some good lady friends who would gladly help her if she would let them.  Two of them who were also co-founders of the Debutante Underground have found love and want the same for Sophie.
One thing that I noticed was that Sophie's soon-to-be fiance didn't spend very much time with her.  But there was also the fact that she was ducking him as much as she could too.
There wasn't all that many surprises in the story except maybe who the father was of Violet's baby.  There is one twist towards the end of the story that I kind of suspected.  Although I didn't really feel like the author left all that many breadcrumbs to point to another woman being involved in a "romance".  It didn't feel all that deep when it was exposed.  But I got the feeling that both of the two people exposed were kind of shallow people to begin with.   But at least there is a H.E.A for more than one couple, quickly pulling all the loose ends together.
Posted by Flame at 9:45 AM