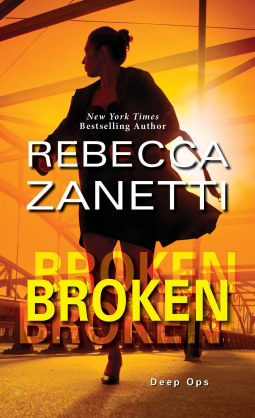 Dangerous: Former Navy SEAL Clarence Wolfe’s unit was taken out with a land mine. Injured and devastated, he hasn’t been quite right since. Worse, the tragedy was no accident. All Wolfe wants now is to take down the man responsible. In the meantime, he’s good with being the muscle for the Deep Ops team—and leading a steamy no-strings-attached personal life. Until one intriguing woman changes everything . . .

Determined:  Reporter Dana Mulberry is on a mission to avenge the death of a fellow journalist. She’s finally hot on a trail—right to a sex club—where she runs into . . . Wolfe? It seems both their leads have led to the same spot. To keep from blowing their covers, they’ll have to at least pretend to have a little fun. Trouble is, they genuinely like each other. And that’s way too risky for Wolfe, especially when, to his surprise, Dana agrees . . .

Complicated:  Drawn to each other in ways they can’t understand, Wolfe and Dana keep it professional—until they’re shot at one night. And when their adventures land them both at the heart of corruption in D.C.—and at odds in their missions—they’ll have to dig deeper than ever to succeed in their quests—and with each other . . .AMAZON LINK
5 STARS

I've read several of the books in this series and liked them.  However, I have been looking forward to this one.  I got a quick peek at this story in a different book.  It really got my attention and I could hardly wait to pick it up. So I was quick to grab a hold of it when the chance came.  I was NOT disappointed at all.  It so deserves 5 Stars on Amazon when it opens for reviews.
Wolfe and even Dana were one-of-a kind type of people.   It took me almost no time at all to get drawn into their story and care about them.
The romance was definitely Wolfe style.  And yes, they do get to some hot sexual encounters together.  But you will have to wait for that for a bit.  Because there is a lot of intense action going on outside of a bedroom. It's coming from several different directions almost all at once.  It's intense and dangerous.  The team that they have surrounding them is both unusual, a bit crazy but also all in when it came to having each others backs.
One of the craziest team member if you want to call him a team member is Roscoe.  Now I knew going in that he was kind of a "fantasy"dog because of some of his strange abilities.  He added a lot of humor to the tense drama.  The kitten in the story is a sweet addition who mainly sits in Wolfe's pocket  and purrs as much as possible.
Things come to a kick-butt conclusion when it comes to the danger to this team.  But also with a H.E.A. for our main characters.  Not to worry though, at least one team member has a bad guy to pursue.  So more adventures ahead!