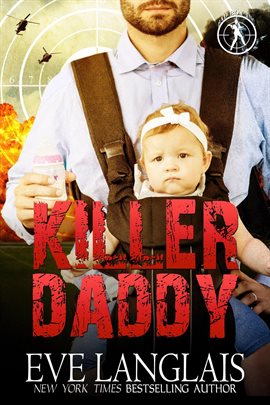 This daddy is a stone cold killer.

You want to know how you give a guy a heart attack? Leave a baby on his doorstep with a note saying: Congrats, you're a daddy.

Not that Declan believes it for a minute. However, until that paternity test proves him right, he's in charge of changing diapers.

Screw that. He's hiring a nanny.

A woman who has no idea she's tempting a killer.

Just like those people trying to kidnap his baby have no idea he's not a daddy you should mess with.

But they're about to learn.   AMAZON
LINK
5  STARS

I love this story. It was intense, funny with great main characters.  And one of those main characters is baby Harper.  I also liked that it wasn't anything like I was expecting. But as it unfolded I found I liked it even better.  This story was so full of action, hilarious banter, and intrigue.
Declan had even more levels to him than even he realized.   He also had a really good team members who were his family that he can trust.
The nanny was not only hot but also full of her own surprises.  I don't want to say too much and spoil it for other readers. I will say that the nanny has skills!
Even though I figured out the villain pretty quickly in the story, there still was plenty of room for the surprise about him at the end.  There was also another dangerous twist that I did NOT see coming towards the end. I liked that.
I enjoyed the whole story and look forward to reading more books in this particular series!