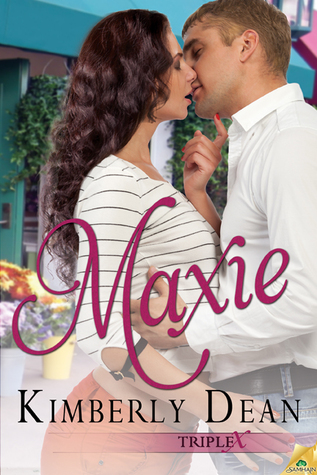 Maxie’s quiet, predictable routine is shattered when she steps outside her flower shop and almost runs into two women. It’s not the near collision that’s startling. It’s the strangers’ faces. It’s like looking in a mirror times two, and it sends her into a dead faint.

Sheriff Zac Ford sees three identical copies of the woman who’s caused him more sleepless nights than he can count, and it stops him in his tracks. Maxie’s buckling knees snap him out of his trance, and he catches her before she hits the cement.

Two sisters she never knew she had? Maxie can’t deal with this turmoil, not on her own. She needs a shield, a rock. For the first time in her life, she takes a wild leap of faith.

When Maxie calls him her boyfriend, Zac has no trouble playing along. It’ll give him time to figure out what these “sisters” want. Soon, though, for-show kisses get hotter and playacting touches grow bold. And Maxie must choose to stay in her safe little world, or grab life by the horns.
AMAZON LINK
5 STARS

I really enjoyed this book a lot.  Great main characters and that includes Maxie's surprise sisters.  But to start with Maxie is so incredibly shy that although she has a mad crush on Zac she just doesn't know what to do about it.
Zac is suffering the same attraction but is also running out of ideas on how to woo this shy gal.  He's also been suffering by every day drinking a horrible cup of coffee.   Why?  Because the shop is right by Maxie's store and he can't get her out of his mind.  When she passes out at the sight of two identical sisters (identical to her) it opens up a door of opportunity for Zac.
There's a fair amount of humor in the story which I enjoyed.  There are also some mysteries that has to do with the 3 women.  And there are some hot scenes between Zac and Maxie.
Overall, I stay involved throughout the story and liked the ending, which also left room for more story about the girls birth family.  The next story has to do with Roxie and her search. It's also a book on want to read because Roxie was a character all on her own.