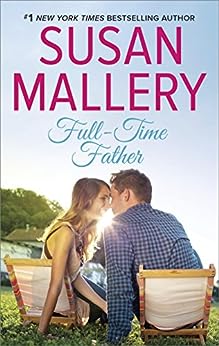 Computer consultant Parker Hamilton's life is thrown into a tailspinwhen a woman named Erin Ridgway suddenly shows up on his doorstep,claiming that he is the father of her four-year-old niece, Christie.But how can Parker be a father? What will he say to his long-lostdaughter? And why is the beautiful Erin suddenly giving him a chanceto be part of Christie's life?

After Erin Ridgway's sister dies in childbirth, Erin promises herselfshe'll do everything she can for her sister's baby, and that includesfinding the baby's father. When she finally meets the reclusiveParker, she wants to give him the chance to know his daughter, butwhat could a lonely millionaire know about raising a little girl? Andis she just imagining the chemistry between her and Parker?  AMAZON LINK
3 STARS

This book had it's moments.  It was sweet even with some of the tragedies that the main characters had gone through.
Erin and Parker had both lost someone and were working their way through grief.   Erin was further along the healing process though because she had to move forward.  Christie might be her niece because of her twin sister Stacey but she was raising her as her daughter.  That came first and Erin had sacrificed a lot to be that single mother.  Stacey had been the wilder, more jump into things sister of the two.  Erin was always "waiting her turn".  That pattern had developed over the years because of the smaller amount of money they had at their disposal.  Stacey often told Erin she was always waiting for life because she was afraid to  reach out for what she wanted.  She didn't make any moves but waited; that theme comes up a few times in the story.  It was a good point though.
Parker was afraid but just in a different way.  He has a tremendous amount of guilt and is always afraid that he isn't enough. Something that it looks like he learned from his parents.  When the truth was, they (the parents) weren't enough.
Two colorful people in the story were of course, Christie and the housekeeper Kiki.  Christie was entertaining and made me smile a time or two.  Kiki was a whole different kettle of fish.  She was unique, colorful in the way she dressed and the way she lived her life.  She embraced life with her arms wide open, and unashamedly.  Her response to a tragedy in her life was totally different from the two main characters.
The only thing that got old for me after a while was the continual angst over several issues.  It caused the story to drag on and on.
There is a H.E.A. and a good Epilogue.
Posted by Flame at 12:11 PM