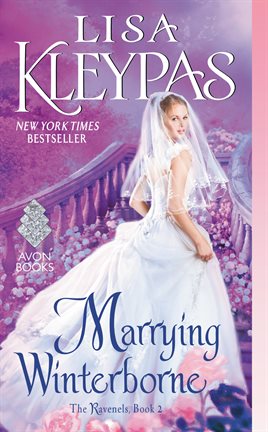 Part 2 of the Ravenels series


A ruthless tycoon. Savage ambition has brought common-born Rhys Winterborne vast wealth and success. In business and beyond, Rhys gets exactly what he wants. And from the moment he meets the shy, aristocratic Lady Helen Ravenel, he is determined to possess her. If he must take her virtue to ensure she marries him, so much the better . . . A sheltered beauty. Helen has had little contact with the glittering, cynical world of London society. Yet Rhys's determined seduction awakens an intense mutual passion. Helen's gentle upbringing belies a stubborn conviction that only she can tame her unruly husband. As Rhys's enemies conspire against them, Helen must trust him with her darkest secret. The risks are unthinkable . . . the reward, a lifetime of incomparable bliss. And it all begins with… Marrying Mr. Winterborne.   AMAZON LINK
4 STARS


I liked this book, with some reservations. It definitely started out strong right at the very first chapter. I liked that, it got my attention, and it showed what a strong personality Rhys had. It was a pretty bold action on Helen's part too, considering the era she lived in and what was and wasn't allowed for a woman. Especially one in mourning, there were rules. And she was boldly bending and breaking them. She took a huge risk and it doesn't end up being the only one.
It was quite a bargain that came about when it came to their re-engagement. Helen had been so incredibly shy but she did her darnedest to break that because it had caused problems that led to a broken engagement in the first place. Helen was beautiful and fragile in appearance. Being tiny and having almost an ethereal appearance caused people to overprotect her. But if she wanted Rhys, she was going to have to break out of that shell. Besides she's a lot tougher than she seems; its just in different ways. I have to give her credit because although Rhys was intense and intimidating in some ways, she was also so drawn to him. I ended up liking both main characters. There were also some really good secondary people in the book. That includes Helen's two younger sisters.
It was good to see that Helen did not feel like she was marrying below her social standing and she valued so much of Rhys. She refused to think less of him just because he is a Welshman and someone in business (which was looked down upon in society). In fact she felt such a tenderness for him, and those things that made him who he was, even down to his accent. Helen had slipped under Rhys guard as well and he was surprised on how as a tough guy, he felt such a tenderness toward her. She seemed to bring a calmness to him.

I said I liked it with some reservations. Here is one of them: with all the sneaking around and having pre-marital sex (a fair amount of it too) there wasn't enough concern about Helen getting pregnant. Rhys was aware but couldn't seem to get Helen to realize the dangers. AND he didn't take any measures to even try to prevent pregnancy either. Helen was thinking if she got pregnant, they could hurry the wedding. At those times, she wasn't even considering how screwed she would be if he died before they could marry. But he began to get a wake up call about that possibility.

There was a fair amount of sex like I mentioned, detailed sex. After awhile, I felt like it bogged the story down quite a bit. Of course, there was also romance too. And when the secret that Helen has is revealed, its a doozy. She had her suspicions about it being true but is not one that she is even happy to have confirmed. I don't want to spoil the surprise so I'm not giving any spoilers about it.

There is a H.E.A. for Helen and Rhys, as they got to understand more about each other.
Posted by Flame at 3:06 PM