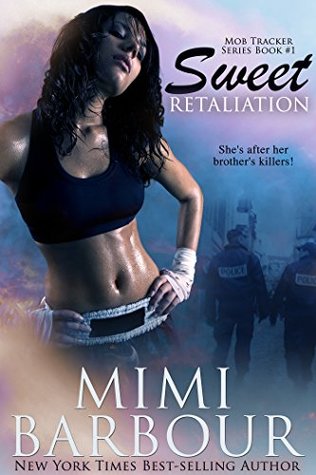 A virgin librarian with hot-chick potential, the conflicts in her story won’t let you put the book down. Be prepared for an all-nighter…

She watches the mob kill her twin and is too frozen with fear to stop them. How can she live with that cowardice eating away at her self-respect? Revenge claws at her sheltered existence until she can’t breathe. Though she’s naïve, she isn’t stupid. When she finds a stash of loot in her brother’s gym locker, she has the means.
Now all she needs is the guts to make every one of those low-life gang members pay.

People might think detectives are hard-assed cops with no home life, but Trace McGuire has a dying mom he loves fiercely. Already stressed over his personal problems, he takes a bullet for a virgin beauty hiding while mobsters shoot her brother.
This chick draws out every protective instinct he thought had disintegrated over years on the job and he becomes invested – in her hot body, her plans for retaliation and her fighting spirit.

Helpless, he watches her enter the seedy underworld that’ll eat her alive.

Then he sees her fight.

And wonders if they’ll survive her.   AMAZON LINK
4 STARS

Trace and Cass both made for good main characters.  It's fun to watch Cassidy go from what others considered nun-like to a whole different kind of woman.  She had skills that she had kept somewhat hidden and her father and brother Raoul had kept her super sheltered.  But she was determined to make the people who killed her twin pay.  So, there were a whole lot of changes that she was determined to make and she does. Cass was a pretty smart cookie for the most part. Then she did something so stupid after saving Dani's life I almost groaned!
Trace is an honest, steady, reliable man. A handsome cop with no patience with games especially the ones women try to play with him.  He has women trying to get his attention with those games but he wasn't a player.  And once Cass got on his radar he was all in when it came to her.
There is plenty of action, danger and unusual friendships.  There is also an unusual romance between Trace and Cass but it was also so often sweet too.
So much gets concluded except for the main question of the book so I have to agree with other reviewers, "cliffhanger." I know the info says Book 1 but I just didn't realize that the story wasn't going to end in this one.