BOOK REVIEW- Every Step (Music, Love and Other Miseries: #3) by C.J. Burright * 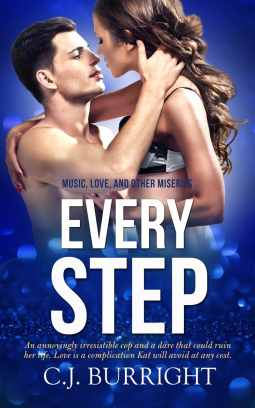 An annoyingly irresistible cop and a dare that could ruin her life... Love is a complication Kat will avoid at any cost.
Sharp-shooting cop Katerina Hellman needs a fresh start. Leaving behind a failed marriage, she ditches the city and bunks with her sister in the tiny town of Graywood. When the local police chief offers her a position as the temporary firearms instructor, she jumps on it. So what if it's a mostly boys' club? She's done with men, doesn't need their unrealistic expectations and not even the tall, dark and annoying badge Roman can change that.
Roman Farkos lives for his job, to serve and protect...until Kat shows up with her snarls and superiority. He can't resist pushing her buttons. She wants to be considered one of the boys, which would be fine if she didn't stir a desire to do more than protect and serve her. Kat may be raw from her recent split, but Roman resolves to convince her that love—preferably with him—is worth the risk.
When Roman challenges Kat to a six-week contest of wits and skills, it's game on. As they work and play side by side, her resistance fades and unexpected passion flares. But when big-city danger hits and secrets are revealed, Roman faces the greatest challenge of all—convincing Kat that real love is worth the fight.  AMAZON LINK
3.5 STARS


I have to admit to mixed feelings on this one.  That makes it hard for me to decide how many stars to give it on reviews.  So I ended up liking it but with some reservations. On the plus side was that Katerina (Kat) and Roman who were both interesting people.   And they each had their own emotional challenges in their lives.  I did get a big kick out of how Roman loved how challenging Kat was.  Instead of being turned off by her unique personality, he embraced it.  It took her a while to realize he saw more of her than her beauty or kick-butt skills, he saw her.
Kat doesn't know what to make of Roman.  Right off the bat he irritates her but as time goes on he confuses her more and more.  But she's a Hellman and they don't back up from any kind of competition.  Roman also can speak in a monotone voice with almost no expressions on his face.  That is something that she finds hard to deal with.   But she also has a plate full of problems that are trying to push her to her breaking point.
Another person who adds snark and interest is a young woman in foster care named Valerie.
Some of her poor decisions also add to the danger factor.
For me, there were times when the story seemed to drag a bit.  I think it's the times where certain issues were hashed over and over.  It also felt like there was an over use of the phrase about Roman's spicy, sweet (holiday) scent.  I do have admit though that the other parts of the story was good when it came to descriptions of locations and other parts of the story.  So can you see my dilemma?
There is a good dramatic ending to the story.  Also add in a good Epilogue which shows some tenderness, and a H.E.A.


"I voluntarily read and reviewed an advanced copy of this book. All thoughts and opinions are my own.”
Posted by Flame at 2:34 PM