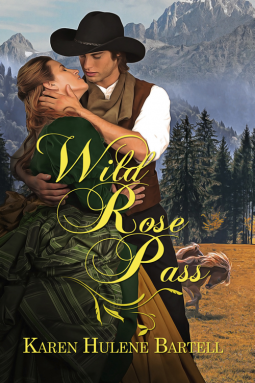 Cadence McShane, free-spirited nonconformist, yearns to escape the rigid code, clothes, and sidesaddles of 1880s military society in Fort Davis, Texas. She finds the daring new lieutenant exhilarating, but as the daughter of the commanding officer, she is expected to keep with family tradition and marry West Point graduate James West.

Orphaned, Comanche-raised, and always the outsider looking in, Ben Williams yearns to belong. Cadence embodies everything he craves, but as a battlefield-commissioned officer with the Buffalo Soldiers instead of a West Point graduate, he is neither accepted into military society nor considered marriageable.

Can two people of different worlds, drawn together by conflicting needs, flout society and forge a life together on the frontier?   AMAZON LINK
3.5 STARS

While this book had good main characters, and good history of the times, it was just okay for me.   I have to say that the author did their homework when it came to the foods, natural trees and fruits just to name a few things.  But it also seemed to almost be too much details for me.  There was also an overuse of the words, "sneering, snickered, snickering."  It's like it kind of jumped up at me time and time again.  That sure distracted me from the story.
Now, on the positive side, I did like both Ben and Cadence.   It wasn't hard to have empathy for Ben when you look at all he'd been through.  Plus the emotional part of his longing to belong to a family.  He was lonely and so tired of now belonging anywhere.  Never really welcomed and always feeling like he was on the outside looking in.   Even with all of that I liked that he hadn't turned bitter and his compassion often showed up.
Cadence had some growing up to do and was often immature.  But she was the only child of the commanding captain, so I get it.  But she was also compassionate, loving, and intelligent.  Well, when she wasn't doing stupid stuff a time or two.  It still doesn't rule out the rest of her good points.
Other people who play a big part in the story are not only Cadence's parents but also James and Mariana.    James was one nasty piece of work.  His main concern was himself no matter what it cost others.  Mariana is a little girl who makes you care about her and what her future will be.
The story ends with an unexpected twist, a H.E.A. for several people.  Also a couple of recipes from the story are included as well.

"I voluntarily read and reviewed an advanced copy of this book. All thoughts and opinions are my own.”
Posted by Flame at 12:01 PM