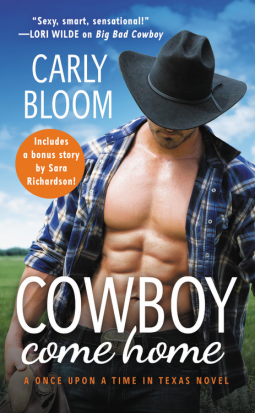 Welcome to Big Verde, Texas, where a love-'em-and-leave-'em cowboy faces his greatest challenge yet---the woman he left behind. Perfect for fans of New York Times bestselling authors Lori Wilde and Carolyn Brown.
Some cowboys aren't cut out to be Prince Charming---and Claire Kowalski knows that better than anyone. She gave her heart to Ford Jarvis two years ago, yet that didn't keep him from disappearing into the sunset. Now that he's back in Big Verde, Texas, she's determined not to make the same mistake twice. But the ruggedly sexy cowboy still knows how to push all her buttons, and avoiding him is nearly impossible when she needs his help.

Ford didn't plan on returning home---ever---but when he hears that the Kowalski ranch is in trouble, he hightails it back to town. He's not eager to be reminded of the life he can never have, but his time in Big Verde is only temporary. He'll stay long enough to get the ranch up and running, then hit the road again. But when Ford finds out the new foreman he's training is Claire, still as stubborn and beautiful as ever, this cowboy is going to have to decide what matters most---repeating the mistakes of the past or fighting for a future with the only woman he's ever loved.. AMAZON LINK
4 STARS

"Cowboy Come Home"was full of community, humor, and people who where there for you when you needed help.  They also really knew how to have a good time as well.
Claire sure did some stupid stuff sometimes but she was also bold, adventurous, really skilled in certain areas and funny.
Ford was really skilled when it came to all his years of ranching but he sure was one messed up guy.  When you get to look at how he was raised and events from his past you get a really good idea of how that happened.  And what he believes is the "Jarvis Curse" keeps slapping him in the face.   He's thirty-one and heard about it all his life.   It's just one more of his battles.
Claire's friend Maggie was one hilarious woman.  But one of their friends Bubba was too, with some of that coming from his naivety.
Claire and Maggie had so much humor that it often came through on their t-shirts which sported some funny sayings.
Wow, those cowboys had a slew of superstitions that was shown really well.  It had me shaking my head a few times, with a smile on my face.
I liked how there was that "tug" between Claire and Ford.  They just knew when the other one was in a room.  I've heard that before in other books but this story did it in an unusual way.
Claire and Ford's struggle wasn't the only one in the book but I liked how it all worked out.  Plus it did include a sweet Epilogue.
While I enjoyed it, I wouldn't say it was on my list of favorites.  I do know that most of all I enjoyed the humor (if you haven't already guessed that).