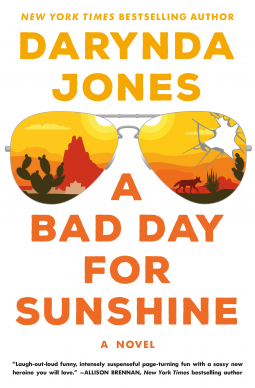 New York Times bestselling author Darynda Jones is back with the brand-new snarky, sassy, wickedly fun Sunshine Vicram series!
Sheriff Sunshine Vicram finds her cup o’ joe more than half full when the small village of Del Sol, New Mexico, becomes the center of national attention for a kidnapper on the loose.
Del Sol, New Mexico is known for three things: its fry-an-egg-on-the-cement summers, its strong cups of coffee—and a nationwide manhunt? Del Sol native Sunshine Vicram has returned to town as the elected sheriff—an election her adorably meddlesome parents entered her in—and she expects her biggest crime wave to involve an elderly flasher named Doug. But a teenage girl is missing, a kidnapper is on the loose, and all of it's reminding Sunny why she left Del Sol in the first place. Add to that trouble at her daughter’s new school and a kidnapped prized rooster named Puff Daddy, and Sunshine has her hands full.
Enter sexy almost-old-flame Levi Ravinder and a hunky US Marshall, both elevens on a scale of one to blazing inferno, and the normally savvy sheriff is quickly in over her head. Now it’s up to Sunshine to juggle a few good hunky men, a not-so-nice kidnapping miscreant, and Doug the ever-pesky flasher. And they said coming home would be drama-free.

“I voluntarily read and reviewed an advanced copy of this book. All thoughts and opinions are my own.”  AMAZON LINK
5 STARS

Weird little town, weird people results in a really good story. Each and every one of the people are characters all on their own.  Sunshine remembers that the town called Del Sol was often called the Psych Ward by the locals.  And it sure seemed to fit as well as being amusing most of the time.  Well, if you don't count the dangers.  Those were real too.

But Sunshine and her daughter Auri they were in a class all of their own.  I loved how they interacted with each other and some of the goofy things that they said.  Made me smile more than once.  But don't get me wrong, Sunshine is no wimp.  She's one fierce Mama Bear.  In fact, the principal of the school here remembers her as a firecracker.
Getting back to the principal, I really liked him.  He really was unusual unlike any principal I ever met.  But he also added a flavor of his own at the times he showed up in the story. So did other people and that includes Cruz, who shows up in part where Auri is in her new school.  This will make up part of the story and Auri's upsets from school do add just one more thing to Sunshine's plate.
There are all kinds of secrets in this book and Levi Ravinder seems to be holding quite a few too.   We only get to see some of those secrets about people in this book but not all of them.  I kind of went, "Oh no" when I saw that this book had to continue onto another one to hopefully get all the answers.  I won't lie I was disappointed about that.  However, I loved the main characters so much, I think I'm going to have to follow up on this when I get the chance.
What makes it even more interesting is that Sunshine has some large gaps in her memory, and it's important that she remembers or at least figures out what is missing.
I really enjoyed how the chapters started with an amusing Police Blotter entry, they really funny and appropriate.  I hope that Chapter 12 Police Blotter entry makes it into the final copies because that one was really funny!