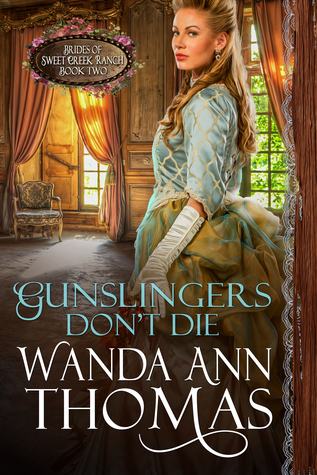 MAGGIE REED HAVEN, formerly known as Lady Lily, Female Bounty Hunter, once loved risk and adventure, but she has exchanged her reckless ways for a more stable life. Ready to begin her career as a teacher, she has the shock of her life when she discovers that the gunslinger she had foolishly married, and who she believed had promptly got himself killed in a shootout, is alive and well. The revelation presents an enormous, unavoidable problem—Boone Haven is the father of her three-year-old son. Determined to do right by her son and Boone she returns to Wyoming, where the wild allure of the West and the dark danger of the gunslinger tempt her to give up the new life she has created. Maggie finds herself torn between her tornado-like attraction for this deadly gorgeous man and her need for a safe, respectable future.

BOONE HAVEN hates his lonely life. But a man who makes his living as a hired gun, is bound to attract a passel of trouble. Hounded by outlaws, he can’t go home. But when Maggie, aka Lady Lily, explodes back into his life with his son and dog in tow, Boone has no good choices. If he stops running, he risks exposing his loved ones to danger. If he continues his wandering existence, his son might never know his father. And if he forgives Maggie, he risks falling under her powerful spell again.

Can the gunslinger escape his past, and learn to trust and love? What does the future hold for the teacher when she discovers…GUNSLINGERS DON’T DIE?  AMAZON LINK
4 STARS


This was a good story with great main characters and that includes Colt who is Boone and Maggie's son.  Maggie was unusual in her own right and tougher than she gives herself credit for. She is also loving and has raised her son well with her only real help being
Brigetta.  Her life has had several life-changing things happen in it that caused her to change her life's path more than once.
There is also some good supporting people in the story.  I really liked the second chance boys, who were rescued and are a part of the Sweet Creek Ranch.  Those boys" who ranged in ages added so much to the story.
Emotions, adventure, hot attraction between the M.C.'s and danger play a big part in the story.  As does loyalty and a desire to protect.  Boone was big on not staying around at the ranch for long because of his desire to protect those he cares about.  Many at the ranch don't understand that at first and just think he's someone who runs away, without getting close to many of them.
One of my favorite people was Colt's nanny,  Swedish immigrant, Brigetta Lyndtz.  She was fierce, loving with the heart of a fierce warrior.  She also adds some humor with some of her sayings.  I'm happy to see that she gets her own story in the next book.
The story has a H.E.A. ending for now.  Because things do get settled between Boone, Maggie and Colt.  But there still is a danger out there for the people of this town that hasn't been fully overturned yet.