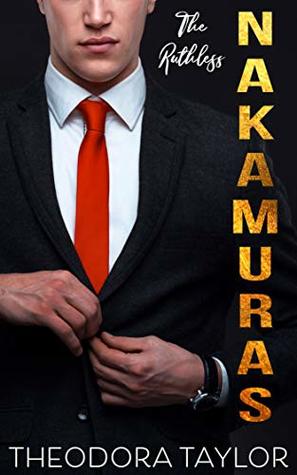 The fan favorite Nakamura brothers have finally been collected into one crazy hot AMBW boxset! This limited time only set includes HER PERFECT GIFT, HIS REVENGE BABY, and a very special preview of Hayato Nakamura's long-awaited serial novel, 12 MONTHS OF KRISTAL.

I’ve been hiding nearly all my adult life to protect myself and my autistic daughter from the mob boss who wants me dead. For those reasons, I’ve sworn off relationships and vowed never to fall in love again. Suro Nakamura gives exactly zero f-words about my vows. I’ve become the dangerous hitman’s sole obsession, and he’ll stop at nothing to make me his. Is there any way for me to escape him…or resist him?

When travel nurse Lilliana Tucker is coerced by a mysterious stranger into “interviewing” to become Norio Nakamura’s next mistress, she’s pretty sure there’s no way she’ll get the job.

Lilli is awkward, unrefined, and not at all cut out to be a spy–or the lover of a smoking hot Japanese billionaire.

But then—WTH!—she does get the job. And soon her arrangement with Norio goes from a role she must play, to a passionate, barely contained affair.

Lilli knows there’s no way her clandestine relationship with Norio will end in unicorns and rainbows. But there are two things she doesn’t see coming:

1. Falling for the man she’s been hired to betray

2. What he does when he discovers her true identity

PLUS, a very special preview for 12 MONTHS OF KRISTAL

On the eleventh day of Christmas, a Japanese billionaire meets a magical elf in a sushi restaurant. What could possibly go wrong? Or very, very sexy? Hold onto your chopsticks, Wonder Readers, this tale is about to get super romantic. Perfect for fans of omakase sushi experiences, PEOPLE magazine, and watching magical love stories unfold.   AMAZON LINK

BOOK 1- HER PERFECT GIFT....  Great main characters who are carrying quite a bit of baggage around.  We got to read both of their P.O.V.'s in the book.  I liked how Lacey's story unfolds bit by bit.  It's easy to be grabbed by the danger that haunts her as she always has a go bag ready. And also several names that she can change into as well.  But the reason's why are slowly unpeeled like an onion.  Not in a too slow way but in a way that kept me interested. It was interesting to see that she had dreadlocks, I liked that the author wasn't afraid to break out of the expected.  Her daughter Sparkle adds a unique slant to the story. One you don't often see.  Sparkle having A.S. was also something that I wasn't expecting.  But I liked that her gift was in the musical area.
Suro is used to getting what he wants when he wants it.  He's both attracted to and stymied by Lacey because  she refuses to tell him the truth about herself and her past.  It's ironic but she's trying to protect him.  Not realizing he's more capable of taking care of things than she ever dreamed.  Suro does make headway when it comes to inserting himself into her life.  He also keeps digging into her past using all the resources that he has available to him. His co-partner and friend Dexter is a big help in that department.
The baby nicknamed Spidey because of his climbing tendencies makes for some smiles.  He has a mother named Candy who is a stripper who is on the look out for next rich guy.  She barely remembers she has a kid.
I enjoyed the twists and surprises that kept cropping up.  It kept me involved. There is a bit more explicit sex in the story than I would have liked but at least there is a story and not just all sex.
The end of the story was worth waiting for.

The next one gets a "just say no" from me.  I kind of wish it hadn't been added in this set.

BOOK #2- HIS REVENGE BABY
Sorry people but this one just didn't do it for me.  WAAAY too much explicit sex.  Yes, I know she is described as his mistress but did I really need page after page after page of so much explicit sex?  I  don't think so and I almost didn't finish this book more than once.  And Lilliana/Ana I know you've had a rough childhood but more than once I had to shake my head.  I wanted to yell, " Girl, grow a backbone."  My goodness, she had a brother who saw nothing wrong with basically pimping her out. I know she loves her family and would do anything for them.  But she goes along with it like a lamb to the slaughter?  No one respects her much not even her thirteen year old spoiled niece,  Ruby. Ruby who will go through some life-changing experiences.  But they don't change her for the better until later.  That part was good to see.
There are several surprising twists as the book nears the end.  The Epilogue was a good way to pull everything together.
Posted by Flame at 6:39 PM