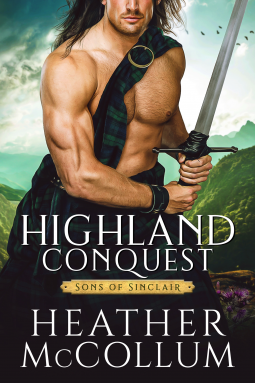 Cain Sinclair has a plan. In order to finally bring peace to his clan, he will wed the young female chief of their greatest enemy. Only problem: capturing her and forcing her back to Sinclair castle doesn’t exactly make her want to say yes. Ella Sutherland may be clever, passionate, and shockingly beautiful, but what she isn’t is willing.
Every attempt Cain makes to woo her seems to backfire on him. A gift? The kitten practically claws his eyes out. A competitive game of chess? Even when he wins, he loses. It seems the only time the two ever see eye to eye is when they’re heating up Cain’s bed. Still, the only thing Ella truly wants is the one thing he cannot offer her: freedom.
But when Cain discovers she’s been harboring a secret—one that could threaten both clans’ very existence—he’ll have to decide between peace for the Sinclairs or the woman who’s captured his heart.   AMAZON
5 STARS

When I first started reading this book, I almost groaned thinking, ''I don't think this is a book that I am going to like.''   I was glad that there is a dictionary of some of the Scottish and other words listed before the story starts.  I also found the abundance of the Scottish words a bit distracting at first.  It finally settled down to more of a battle between the two clans, especially between Cain and Ella.  That's where the "fun" really starts.  And this is where I began to change my mind about this book.
This book should be turned into a movie.  It has everything that you could want in one.  Great, vibrant main characters and a great cast of secondary people. That cast of people not only include the "good" people but also include a cast of not so good people.   Okay, they are evil and each with their own agenda of  revenge but mainly a desire for power and money.  Greed and a thirst for power drives them and they will gladly commit murder to get them.
Cain has a lot to learn when it comes to what he has been taught from birth.  The main thing he has been raised to do was to strategize and conquer.  He had some really good techniques and I especially liked the falcon and the different communications with the colored flags and knots.   I also enjoyed when Cain began to woo Ella and things weren't going easy for him.  He was used to women falling in his arms without much of any effort on his part.  The unexpected tenderness that he showed to Ella added to the romance.  It also surprised Ella too but she was good at escaping having lived with her cruel father.  Ella knew how to keep things stirred up and I enjoyed how creative she was.

Each one of his brothers have their own roles to fulfill and they do.  Justice, Death, War as some of their specific duties that they are assigned by their lunatic father.
This story has not only these things but plenty of plots, action, secrets, romance, even some humor.  Several twists come towards the end of the book and they put a smile on my face.
So did the H.E.A. ending.

“I voluntarily read and reviewed an advanced copy of this book. All thoughts and opinions are my own.”
Posted by Flame at 10:54 AM