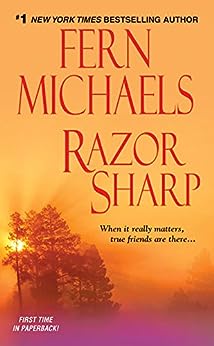 A Friend In Need…Needs The Sisterhood
When it comes to repaying a debt, the women of the Sisterhood—Myra, Annie, Kathryn, Alexis, Yoko, Nikki, and Isabelle—never forget. And now one of their allies needs help only they can give. A powerful attorney with a cut-throat reputation, Lizzie Fox has just taken on a high-profile new client—Lily Flowers, the Madam of a high-end bordello operating under the guise of a summer camp.
The chips—a.k.a. the prominent Washington politicians who frequent the bordello—are stacked against Lily and her girls. But one phone call to the Sisterhood might just swing the vote. And soon, even the highest courts in the land will prove no match for seven fearless friends determined to ensure that real justice is served, Sisterhood style.  AMAZON  4 STARS

I liked this one but it is a bit different.  There was a lot of story before the "girls" even get involved as a team.  Still, it was good and really went quickly.  After they started to sort things out, they had a plan this time.  Well, more of one anyway. They also were in for a surprise when it came to the plots of the main evil person.  I liked how the author didn't give it away right away but made me wait for it.  Great job of drawing it out.  At least one of the team had a theory about the who and why of it and it turns out she was spot on.  But we don't get to know that until much later on.
Lizzie and Cosmo were so sweet in this one too.  Smart as a whip, both of them and crazy in love.  They had people shaking their heads because of how unlikely a couple they were.  Bert Navarro had more to do in this one as Director of the F.B.I.  He has to play it carefully because he's kind of between a rock and a hard place.  But he pulls it off.  Got to like that Bert.  Myra and Annie are keeping the team together.  Annie is one "wild" woman in the group and she's making up for lost time.  I enjoyed the personal relationships so much, I'm going to hate it when this series ends.
Charles is still AWOL just as he was missing from the last book. Is he coming back?  If he does, drama will definitely hit the fan.  The girls and the secondary string seem to be doing pretty good without him but still Myra misses him and he added a flavor all of his own.  If he does return, things have changed so much.  He might be surprised that his word is no longer law and the ladies are more independent than they were; Myra included.  Should make things interesting.

I do have to agree with another reviewer on Amazon that the ending seemed a bit rushed.  The punishment phase was creative but kind of felt like some things were left hanging.  Not enough of a  big deal to make me quit reading the series though.  Just hoping the next book to better,  back to the quality I expect from the author.
Posted by Flame at 10:05 AM