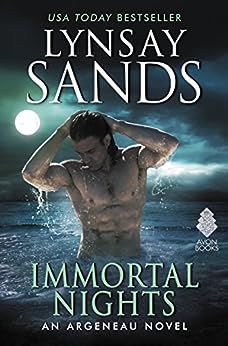 Abigail Forsythe’s life hasn’t been easy lately. Still, if there’s one thing guaranteed to take her mind off an empty bank account and abandoned dreams, it’s a naked man locked in a plane’s cargo hold. A very big, incredibly gorgeous naked man. And when instinct prompts her to free him, Abigail must rely on this stranger for survival . . . a stranger who leaves her thrumming with need every time they touch.
Tomasso Notte knows he’s found his life mate in Abigail. Now he just has to hold on to her. They’re miles from civilization, hunted by his kidnappers. Abigail has no idea of Tomasso’s abilities, or of how intensely pleasurable their unique connection can be. But he’s about to show her, beginning with one wild, hot, immortal night . . .AMAZON  2 STARS


I'm was having a hard time rating this book because I was so disappointed in it.  It had so much potential and it fell down.  It started out good and I liked both Abigail (Abs) and her childhood friend Jet.  It went along pretty well even up to and a little after she found the man in the cage and then it went downhill for me FAST.
The only things in its favor was the fact that Abs was pretty smart and found it easier for her to follow along when the truth about what Tomasso was explained.  That and the friendship between Abs and Jethro (Jet).  The eBook cover was attractive and it promised a lot, it just didn't deliver.  It came out flat and there was so much sex, that there was barely a plot.  Okay, I knew going in that there was going to be BUT not to this exextent.  Please forgive me for saying this but excuse me,  WHY was it necessary to put some much of the story about this man's penis?  It just got outright silly.  I don't like the way the story is going when it comes to people being kidnapped to an island for experiments.  Too much like the movie about Dr. Moreau and it looks like there will be a follow-up book on that subject.  I will not be reading that one.  Too weird for me.
Posted by Flame at 5:34 PM