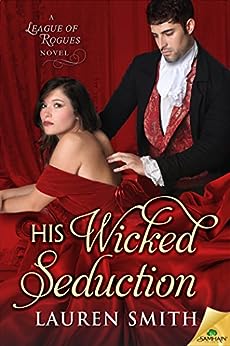 Can the League’s most wicked rakehell be tamed? Or has this Rogue fallen too far?
The League of Rogues, Book 2
Horatia Sheridan has been hopelessly in love with Lucien, her brother’s best friend, ever since he rescued her from the broken remains of her parents’ wrecked carriage. His reputation as London’s most notorious rakehell doesn’t frighten her, for under his veneer of cool authority she has glimpsed a man whose wicked desires inspire her own.
Lucien, Marquess of Rochester, has deliberately nurtured a reputation for debauchery that makes every matchmaking mother of the ton quake with fear. His one secret: he is torn between soul-ripping lust for Horatia, and the loyalty he owes her brother.
That loyalty is put to the test when an old enemy of the League threatens Horatia’s life. With Christmas drawing near, he sweeps her away to his country estate, where he can’t resist granting her one wish—to share his bed and his heart.
But sinister forces are lurking, awaiting the perfect moment to exact their revenge by destroying not only whatever happiness Lucien might find in Horatia’s arms, but the lives of those they love.
Warning: This book contains an intelligent lady who is determined to seduce her brother’s friend, a brooding rake whose toy of choice in bed is a little bit of bondage with a piece of red silk, a loyal band of merry rogues and a Christmas love so scorching you’ll need fresh snow to extinguish it. AMAZON

Not my cup of tea.  I hate to say this about any book, but I just didn't like this one.  I wasn't drawn into  the characters or the story.  Too much lust/unrequited love, where I was often rolling my eyes at some of the shenanigans. Lucien was so hot and cold towards Horatia that I wanted to slap him.  I understood why but after awhile it was really annoying. I know the title tells you that there will be a seduction but didn't feel charming at all.  There were a few times that were good, and at least one time where I did laugh, it just wasn't enough to save it for me.
Posted by Flame at 7:46 AM