BOOK REVIEW- HOW TO TRAIN YOUR HIGHLANDER by Christy English 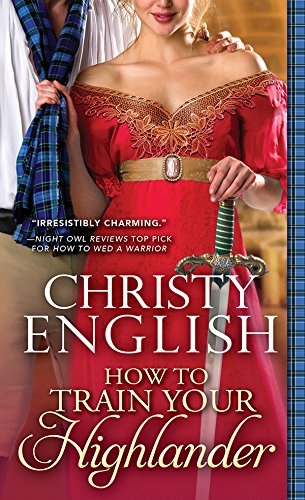 Book 3 of 3 in Broadswords and Ballrooms (3 Book Series)

She's the Hellion of Hyde Park...
A foolproof plan to avoid marriage:
1. Always carry at least three blades.
2. Ride circles around any man.
3. Never get caught in a handsome duke's arms.
Wild Highlander Mary Elizabeth Waters is living on borrowed time. She's managed to dodge the marriage banns up to now, but even Englishmen can only be put off for so long...and there's one in particular who has her in his sights.
Harold Percy, Duke of Northumberland, is enchanted by the beautiful hellion who outrides every man on his estate and dances Scottish reels while the ton looks on in horror. The more he sees Mary, the more he knows he has to have her, tradition and good sense be damned. But what's a powerful man to do when the Highland spitfire of his dreams has no desire to be tamed...AMAZON  4 STARS

I really liked this book. It had great main characters.
Harold, the duke was called Harry through most of the book by Mary Elizabeth, so I think I will do the same.   His mother (the Duchess) , was an interesting person who I liked and added to the story. It cracked me up that Mary Elizabeth addressed her as, "Your Worship."   It had other funny moments too. Mary Elizabeth's mother added to the story too, although I didn't like her too much,  even after things came to the end.
Harry and Mary Elizabeth's first meeting was funny and unorthodox.  Mary Elizabeth is an interesting mixture of a woman but she does have a way with most people and horses.  Harry was dubbed the "Reclusive Duke", but it was soon evident why.  It was tiring for him to be having people constantly scraping and bowing, and being "yes" people to him because of his title.  He wanted to be viewed as a person and that often changed when people heard who he was.  He was afraid the same thing would happen when the "Scots" group found it out.  He didn't need to worry about that, they didn't try to curry favor like others did.  Harry finds the longer he gets to know Mary Elizabeth the more he begins to understand her and her moods.  It was fun to watch Harry become more and more open and enjoying life more than he has before.  He has been lonely and shut off but Mary Elizabeth helps fling open that door. She begins to appreciate him more too but that doesn't mean its a slam dunk for their "relationship". Harry is going to have to work and work hard to make her his.  That was an adventure all on its own.

There were several other good secondary characters as well, Mrs. Prudence, chaperone/companion to name one. Can't say I really liked her in this book though, too prissy.  Just another reminder of how few really understood Mary Elizabeth.
This book "almost" made it all the way through as a clean read but there will be at least a couple sexual scenes.
I thought that the eBook cover was really attractive.
Posted by Flame at 9:37 AM