BOOK REVIEW- BEAUTY AND THE WEINER 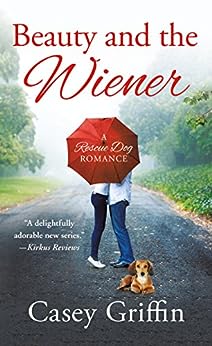 A TAIL AS OLD AS TIME...
Addison Turner has scripted a perfect future for herself, complete with a fairytale ending. She will become the name in doggie fashion design and live happily ever after with the husband of her dreams--and her dachshund, Princess, by her side. Just when her plan is on track and she's gaining recognition at the local dog show, Addison is hit with some Oscar-worthy drama. A group of prize-winning show dogs are stolen from under her nose, and she's stuck asking for help from Felix Vaughn, an infuriatingly hot bartender who is the exact opposite of Prince Charming.
When more dogs go missing--and Felix becomes a suspect--the two team up to clear their names. Although Felix and Addison fight like cats and dogs, there's an undeniable spark between them. And as the trail to the missing dogs heats up, so does their red-hot chemistry. Can Addison be persuaded to throw away her script to find an ending that just might be better than she ever expected?
AMAZON 3 STARS

I thought that this book was okay, likable in some ways but nothing that really grabbed me.     Addison is the sweet, somewhat naive, hardworking, ambitious woman looking for a fairy-tale man. Addison seems to be caught up in a lot of fantasy ideas when it came to getting through life.  In a lot of different areas, including what her dream man should be. Addison unexpectedly meets Felix.  Felix is the tall, handsome, man who has observed people and learned much from it.  Addison is a little bit like an open book in the beginning pages with Felix being more of a mystery.  A charming mystery.  Philip Montgomery III, also figures into the story.  He sure looks like the real deal when it comes to Addison and her checklist for Prince Charming.  But is he the one?
There are a few surprises in the story with an unexpected twist or two at the end; which was good. And of course the H.E.A. that Addison always dreamed of; although it wasn't exactly the who and how she had "planned".
I received a copy of this book via Netgalley and this is my honest opinion of it.
Posted by Flame at 11:59 PM