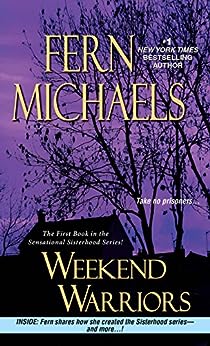 Justice Has A New Outfit
Life isn't fair. Most women know it. But what can you do about it? Plenty. . .if you're part of the Sisterhood. On the surface, these seven women are as different as can be--but each has had her share of bad luck, from cheating husbands to sexist colleagues to a legal system that often doesn't do its job. Now, drawn together by tragedy, they're forging a bond that will help them right the wrongs committed against them and discover an inner strength they didn't know they had. Growing bolder with each act of justice, the Sisterhood is learning that when bad things happen, you can roll over and play dead. . .or you can get up fighting. . ..AMAZON  4 STARS

I finally was able to read the first book in this Series.  I was nervous about reading it after reading in another book that this one had a brutal revenge.  Not sure I wanted to read that.  But all of a sudden I realized that I wanted to know more about Charles and Maya.  How they met, more about how the group was formed.  So, this was a good book but it did make me flinch a time or two.  I do have to say that I have read a few more of the book and so far they aren't quite as "bad" when it came to revenge as this one.  Well wait a minute, there was the revenge that Myra finally gets in another book also involved a pretty physical punishment too.  I guess you will have to pick and choose according to how much you want to read about certain punishments.  On the upside though, there isn't hours of details on the more physical ones.  If I had read this book first, I'm not sure that I would have continued on with the series.
I did wonder how Jack, the ADA was able to get so many court ordered searches.  It was done so quickly and it seemed to be without much cause.

I know someone said that they were upset that some of these books were reprints.  Since I never read her books in this series before that is not a problem for me.  They are brand new to  me.
I did like her intro that the author wrote, such great insights. And there was also an interview with Fern Michaels which was a nice touch.  I liked how she said that her Polish grandmother had told her something that has stuck with her.  "When God is good to you, you must give back." And Fern said that she does her best to do just that.  It was interesting to see that she came from a background of being a housewife, and how many rejections she faced when it came to writing and this book series in particular.
Her life motto should probably be, "Never give up, women can do anything they put their minds to."  She demonstrated it in her life and it comes through clearly in her Sisterhood Series.