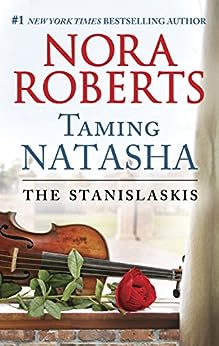 When Spence Kimball sets eyes on Natasha Stanislaski, he's thunderstruck by the intensity of his attraction to the foreign beauty. While the former ballet dancer turned toy shop owner has a fiery temperament that keeps most men safely at bay, Spence can’t seem to resist her. But he isn’t sure Natasha would be interested in a single father. Sensing a hidden wound, Spence and his little girl join forces to find a way into Natasha's closely guarded heart. He'll do whatever it takes to tame Natasha's fears…and show her how to love.
Previously published in 1990.  AMAZON  4 Stars

I liked this book; it was sweet, tender and emotional.   Good main characters, all three of them.  Natasha (Tash), Spence and his daughter,  Frederica (Freddy).  There were a few surprises, some past griefs but it was a charming story over all. It was nice to see life in a small town being presented the way it was.  Nice that Spence not only saw the benefits and that he also enjoyed them.  I think some of the things that he appreciated are timeless, even in our current times.  The only thing that dated it a little bit was the girls being gaga about a man in tweed.  Just had to throw that in.  Even though it didn't do any harm to the story.  Family relationships, friendships and romance is also timeless and very much a part of this story.
Posted by Flame at 2:01 PM