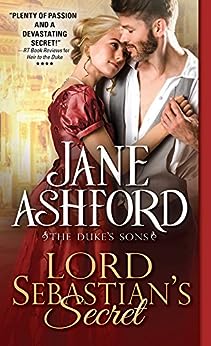 He's hidden this shameful secret all his life...
Lord Sebastian Gresham is a battle tested soldier and brilliant strategist. Yet all his life he's had to hide his complete failure to decipher letters. In his own mind, he's just stupid. What a miracle it is that he's found the perfect bride. Lady Georgina Stane is beautiful, witty, and brilliantly intelligent. Sebastian is head over heels in love, proud as a peacock, and terrified. If she finds out, he'll lose her love forever. AMAZON  4 STARS

A lively story.  I laughed in the first chapter.   Oh, yes I did.  And it didn't take long for me to be pulling for both Sebastian and Georgina almost from the start.  It happened so fast, it surprised me. I kind of held my breath hoping the enjoyment would last throughout the book.  I did enjoy most of it, because it was one unorthodox household that Georgina came from.  The only thing  didn't care for was the reincarnation that was included in the story. It did like that most of the people treated the kindly Hindu man ( Mr. Mitra ) with kindness for the most part.   It did add some craziness to the story though when Georgina's father latched onto it.    He is a man who likes to study a lot of subjects.  He usually focuses on one for quite a while then moves onto other things.  He thinks he's smart but as far as I could see he didn't have a lick of common sense.  At first he seemed to like Sebastian but he got some weird notion in his head and then he was downright mean spirited to Sebastian.  I didn't like that, mainly because I don't like bullies.  But he does get called on it and straightens up his act.  Let's face it both of her parents were kind of flaky but I think I liked her mother best.  Her mother was all about her "herd" of pugs and that caused some hilarious situations.  I also liked both of Georgina's sisters.  I often marveled at the youngest girl, Hilda, and her ability to outsmart and out debate just about everyone, regardless of their age or experience.
Sebastian and Georgina get their happy-ever-after and really enjoyed their moments of tenderness as they came to understand and appreciate each other.
Posted by Flame at 8:59 PM