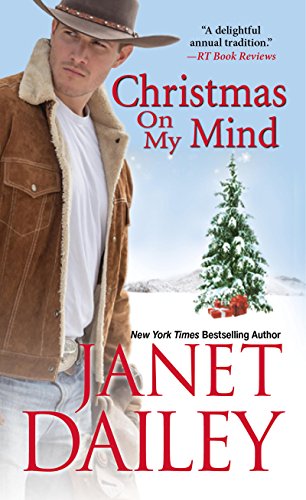 The little town of Branding Iron, Texas, keeps an annual tradition that makes the holidays especially festive—the Cowboys’ Christmas Ball. But Sheriff Ben Marsden, busy with work, joint custody of his son, and caring for his aging mother, has no plans to attend.  Not until a pretty newcomer to his small town gets involved in the planning. Suddenly Ben finds himself wanting to keep a close eye on Jessica Ramsey, and not just because her relatives seem to be in jail more than out. He can tell the mysterious redhead has secrets in her past, but now that she’s bought a little fixer upper with her mom to start a bed and breakfast, the whole family’s turning over a new leaf. With the prospect of dancing and celebrating ahead, surely there’s time for everyone to unwind. Because this year, more than ever, Ben’s got Christmas—and loving—on his mind  AMAZON 3.5 STARS

Jessica's entrance into town was no going exactly as planned, but it was a bit dramatic.  I liked both of the main characters and Ethan, Ben's son.  There were several other secondary characters, who added interest to the story.  Both Ben's mom and Jessica's mom played their parts in the story.  Clara (Ben's mom) was steady, welcoming and loving.   Jess's mom Francine, was a basket case; but many of the reasons became pretty clear as the story goes on.   It hasn't been an easy road for Jess either but she's a tough little fighter, a survivor, so she just guts it up and works hard.  While I enjoyed how the writer showed how much work had to be done to whip things into shape on an old house, it also felt like some of the details went on a little bit too long.  Ben had some problems of his own; mainly with his ex-wife it had to do with time spent with his son.  She knew how to be nasty and abuse her position of power over the situation at times.   But Ethan was still a sweet, likable little boy who you can care about enough to hope for a good outcome between father and son.  The developing relationship between Jess and her mother seemed fairly realistic when you realized what Jess was taking on.  The romance, the genuine liking between Jess and Ben that was developing was sweet and steady.  The manage to work through the challenges of her past really well...after a while that it.
The story was fairly predictable at times, with a twist at the end that wasn't as predictable.
H.E.A. does come at the end with a Epilogue as well.

There is also an excerpt of another book at the end of the book,  Sunrise Canyon