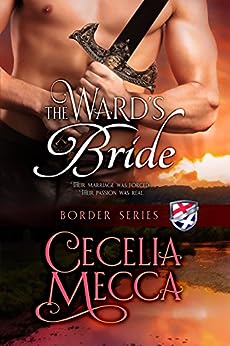 Their marriage is forced. Their passion is real.
The Ward-  English knight Sir Adam Dayne is offered the ultimate prize by the earl who raised him: lordship of Langford castle. All he must do is accept a betrothal to the Scottish Marcher warden’s beautiful daughter, a match made to keep peace at the tumultuous Anglo-Scottish border. Sir Adam relishes the prospect—until he meets the woman he is to wed.
The Bride- Lady Cora Maxwell hates everything English, including the self-assured new lord who has claimed her hand in marriage. Desperate to return home to Scotland, Cora displays increasingly outrageous behavior in the hopes of dissuading the Englishman from the marriage. But when Adam proposes a unique challenge, Cora is forced to face her greatest fears and the burgeoning desire he has awakened in her.
The Ward’s Bride is a prequel novella in a historical romance series. If you like strong female heroines, alpha male types, and sizzling romance, you’ll love the first installment of the Border Series. Transport yourself to the medieval world of The Ward’s Bride today!   AMAZON  4 STARS

I liked this book and forgot that it was a Novella until I began to write this  review. The story felt full and interesting and I liked the main characters a lot. The story did move along pretty smoothly and before I knew it, it was over. The wheels in Cora's brain were always moving.  She was doing her clever best to get out of being married to a stranger that was forced in order to keep the peace.  Her main drive was to leave and return to her beloved Scotland.  She hated the English.  And as it was mentioned that she probably hated them more than anyone else in her whole clan.  And that was before she was forced to marry one.   Adam was a fair man who was well thought of by those who knew him.  I felt for him more than once when Cora began to stir things up.  Adam didn't let Cora have things all her own way but he wasn't cruel either. He did find some ways to get and keep her attention even though she didn't want to weaken towards him.  I'd say a fair amount of the story is about the battle of wills between the two.  But I enjoyed it.