BOOK REVIEW- LAST NIGHT WITH THE DUKE, THE RAKES OF ST. JAMES 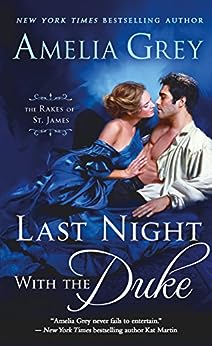 Could finding love be his greatest scandal of all?
The Duke of Griffin has never lived down his reputation as one of the Rakes of St. James. Now rumors are swirling around London that his twin sisters may bear the brunt of his past follies. Hiring a competent chaperone is the only thing Griffin has on his mind--until he meets the lovely and intriguing Miss Esmeralda Swift. In ways he could never have expected, she arouses more than just his curiosity.
Esmeralda Swift considered herself too sensible to ever fall for a scoundrel, but that was before she met the irresistibly seductive Duke of Griffin. His employment offer proves too tempting for her to resist. She can’t afford to be distracted by his devilish charms because the stakes are so high for his sisters’ debut Season. . .unless one of London’s most notorious rakes has had a change of heart and is ready to make Esmeralda his bride in Last Night with the Duke, the first novel in the brand-new Regency Rakes of St. James series by New York Times bestselling author Amelia Grey.   AMAZON  3 STARS

It had an interesting start. And both Griffin and Esmeralda meet each other and the word "clash" isn't really the right word to describe it.  Challenge each other, is probably a better way to explain it. Challenge in a good way; they are kind of intrigued by each other.  Esmeralda is direct, honest and hardworking.  She also has a fierce dislike and distrust of the peerage.  She has good reason but it also felt like that point was belabored a bit too much.  I did like both Griffin and Esmeralda. Griffin had grown up and become more responsible, he also has regrets for past youthful pranks with the other Rakes.   Esmeralda's sister was a nice addition to the story.
It did have a few funny moments, some kindness and tenderness on Griffin's part towards others and Esmeralda and her sister in particular.  That part I did enjoy. even his relationship with his twin sisters and his aunt were loving and protective.

I wanted to like this story more than I did but I found it was just okay.


I received a copy of this book via Netgalley in exchange for an honest review.