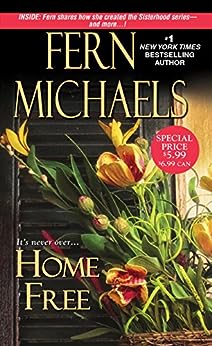 NEW BEGINNINGS FOR THE SISTERHOOD
United by a desire to overcome their personal misfortunes, seven very different women formed an indelible bond and vowed to right wrongs wherever they found them. They've succeeded beyond their wildest dreams. After years known as the Vigilantes, Myra, Annie, Kathryn, Alexis, Yoko, Nikki, and Isabelle are enjoying their hard-won freedom and the chance at a normal life.
As it turns out, once you're a part of the Sisterhood, normal is a relative term. President Martine Connor, their long-time ally, has announced the formation of a top-secret organization. Officially, the CIC won't exist. Unofficially, they'll report directly to the president and tackle the jobs no one else can handle. For the Sisterhood, it's the end of an era—and the beginning of a whole new adventure. .
.AMAZON 4 STARS

I really liked this one but it also could be that it got the reader caught up with the Sisters personal lives. This part is one of the main focuses at first because the girls are chasing their tails trying to figure out who they were supposed to be targeting.  Madame President gives them the best heads up she can, which isn't much.  Love the Gold Shields that they now carry.  We also got to see how some of  the women and their "men" were doing in the romance department.  Things aren't going smoothly for all of the team members in that department and some are in the midst of healing past hurts like Nikki and Jack for instance.   A few like Maggie are meeting new men.  Maggie meets 2 different men and that makes it interesting to see if either one is a good guys/a keeper.  It was good to see Fergus Duffy show back up in this story.  He didn't have a huge part to play but he did add flavor.

There were 2 good twists towards the end.  Big Ones.  And the last one answered some questions for me and also made for more questions too.
Posted by Flame at 2:40 PM