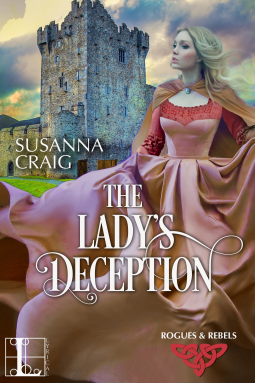 Can a runaway English bride find love with a haunted Irish rebel?

Paris Burke, Dublin’s most charismatic barrister, has enough on his mind without the worries of looking after his two youngest sisters. The aftermath of a failed rebellion weighs on his conscience, so when the young English gentlewoman with an unwavering gaze arrives, he asks far too few questions before hiring her on as governess. But her quick wit and mysterious past prove an unexpected temptation.

Rosamund Gorse knows she should not have let Mr. Burke think her the candidate from the employment bureau. But after her midnight escape from a brother bent on marrying her off to a scoundrel, honesty is a luxury she can no longer afford. With his clever mind and persuasive skill, Paris could soon have her spilling her secrets freely just to lift the sorrow from his face. And if words won’t work, perhaps kisses would be better?

Hiding under her brother’s nose, Rosamund knows she shouldn’t take risks. If Paris learns the truth, she might lose her freedom for good. But if she can learn to trust him with her heart, she might discover just the champion she desires . . .AMAZON LINK
3 STARS


The lovely eBook cover caught my attention.  Even the book information hinted that it was probably a pretty good story.  For me though, it had some hits and some misses.
The main characters Rosamund and Paris had their share of pain and troubles.  Rosamund had such a bleak childhood with little to no warmth and no real love  or affection shown to her.   At least after her father died anyway.  But it came mainly from a lot of years under her brother's stifling control.
Paris has so many regrets and sorrows.  Many that were really never his to shoulder.  He did have a loving family though and they missed him.  Because he has basically hid himself away.  His family has their moments in this book that adds a warmth and got-your-back feel.
I have to say right here, that this book didn't quite draw me in as much as I had hoped.  There was a slower pace where not a lot really seemed to be happening for quite a while. I had a hard time staying interested in the story.
I will say that Daphne and Bell, who Rosamund is supposed to be a"governess" to did add so fun and adventures.
There are some moments of sweetness as well as some heat from a couple of sexual scenes in the book.
I did like the twist at the end of the book.  It does contain a couple.  And the Epilogue is a nice touch as well.


“I voluntarily read and reviewed an advanced copy of this book. All thoughts and opinions are my own.”