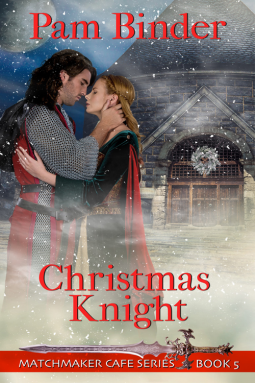 Colin Edward Penrose, a knight from fifteenth-century Glastonbury, England, must solve the riddle of his family's curse and marry a woman out of time—or lose his ancestral home. With a matchmaker's help, he meets a woman to whom he feels an instant attraction, but he knows the curse makes falling in love dangerous for her. Madeline Murphy, defense attorney in a prestigious law firm, needs a date for her family's Christmas Eve party. In desperation, she turns to a matchmaker for her knight in shining armor. The man supplied exceeds her wildest fantasy but vanishes without a trace. A year later she needs a date for her mother's wedding, and she asks the same matchmaker. One problem: In order to find her mystery man, she must travel through time. AMAZON LINK
3 STARS

The eBook cover was the first thing that caught my eye.  It was just so pretty and slightly magical looking.
This book had good main characters.  Colin was an honorable man.  He was also surrounded by some people who had their own agenda's.  And not necessarily ones that would benefit him.  In fact, they want to destroy everything that is important to him.  The main reason being greed.  Prejudice and religious intimidation also comes into play.
Madeline is a courageous woman with a kind heart and also a person of honor.  She cares about other people a lot and Colin sees both her courage and her caring.  She loves both her mother and her father, although I disliked the way her father treated her.  He just about worked her into the ground with very little free time for herself and what she valued.  Business and being a success is his main focus. He also has plans on how he expects his daughter to line up.  Even hand picking the man he expects her to marry.  It was good to see her develop more of a backbone even if she had to step back in time to find it.
If you are looking for villains, you will have several choices.  The author also throws quite the surprise towards the end when it comes to villains.   But there is also some good people in the story too so don't despair.
There is a H.E.A. but that also involved a bit of a twist as well.

“I voluntarily read and reviewed an advanced copy of this book. All thoughts and opinions are my own.”
Posted by Flame at 8:02 PM