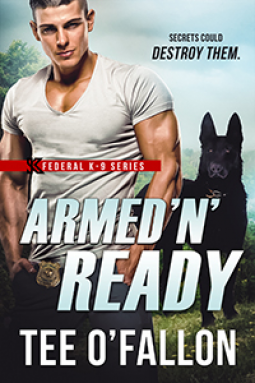 Each book in the Federal K-9 series is STANDALONE:

Massachusetts State Police Sgt. Nick Houston is as tough as they come, and he and his K-9, Saxon, are hot on the trail of a major illegal gun dealer. But his best lead—the beautiful owner of the Dog Park Café, Andi Hardt––is not cooperating. Doesn't matter how sexy she is, or that his dog seems to be in love with her. She's a suspect and he won't cross that line. Ever.
Andi Hardt sank everything into her dream business—the Dog Park Café, a restaurant catering to dogs as much as people. Now everything is in jeopardy because of one extremely frustrating, incredibly hot state trooper. Like it or not, she's in Nick's crosshairs, and he's calling the shots. Her only option: cooperate, or lose everything she's worked so hard for.
Nick and Andi are catapulted straight into the danger zone, forcing them to make life-altering choices, and face their desires. Risking his life for Andi is the easy part. Risking his heart is the toughest assignment Nick will face.   AMAZON LINK
4 STARS

Great start to this book.  The startling beginning put things into the intense category right away.
Andi has had bad radar when it comes to men and it looks like another one used her again and now she's in danger.   She's been friends with Joe for many years and he sure has kept some dangerous secrets.  Andi is a stand up gal who finds herself at the wrong place at the wrong time. And she's having a hard time convincing law enforcement people that she is innocent of wrong doing.
Nick's got a job to do and he's good at it. So is his K-9 partner Saxon.   They are good together on the job and at home.  What can I say, I loved the police officer Saxon.  I consider him another main character who added a lot to the story too.
This particular assignment also has personal issues for Nick that make his drive to find the criminals even stronger.
I liked the idea of the business that Andi is running. The Dog Park Café, was well drawn and easy to envision.  Tess is both friend and manager for the business.  You just know that she has her own story which is just hinted at in this book.
Oh, and that line that Nick would never cross?  He does but it's not going to be right away.  And this assignment puts more than one bump in the road when it comes to their romance.

Nick has a lot of work buddies who are also friends that show they have each other's backs.  Any time, any place.  I'm sure there are enough interesting people to include more stories about them.
There is a humongous, dangerous, surprise twist towards the end.  You'll never guess who the Master Mind behind everything is.  Beautifully done.  The danger went off the charts and several people almost die.  But that's all I'm going to say about that.  I hope I haven't said too much already.

I just want to mention that this book was dedicated to Yarmouth Police Department K-9 Sgt. Sean Gannon shot and killed in the line of duty.  He was executing a warrant, highlighting how dangerous the job can be.  His K-9 partner Nero was also shot  during the incident.  It sounds like he is  now retired.  The author  mentioned this book is also dedicated to the Massachusetts State Police K-9 Unit.

“I voluntarily read and reviewed an advanced copy of this book. All thoughts and opinions are my own.”
Posted by Flame at 8:33 AM