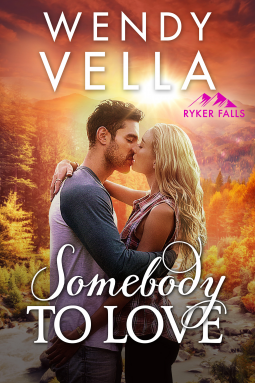 Description
He was the bad boy no one trusted.
Bailey’s burned out, and not sure what leads her back to Ryker Falls, but has a feeling it’s got something to do with closure. Bad boy Joe Trainer was once her soulmate, but she isn’t sure she has a soul anymore. Finding he’s made something of his life is a shock, as he’d been on a one-way trip to hell when she left. This new Joe is sexy and enticing, but she knows all too well there’s a devil underneath the urbane exterior.
She was the good girl who never broke the rules.
When Joe’s childhood friend, Bailey Jones, returns to Ryker Falls, his life suddenly shifts from settled to off-center. Once they’d been closer than anyone ever guessed; now, they’re chilly strangers. But Joe’s not letting his stubborn, sexy-as-hell ex-best friend stay closed off. He lost her once through his own stupidity; this time he’s never letting her go. Joe knows he doesn’t deserve a second chance, but he’s never played by the rules before, so he’s not starting now. Game on.  AMAZON LINK
5 STARS


What a great little gem this turned out to be.  And talk about drawing me in quickly.  Within the first couple of chapters I so wanted to know more of Bailey's story.  She's been away 15 years but it also looks like a lot of those years had been tough on her.  Bailey may have been basically all on her own except for her controlling grandfather.
Of course Joe's life hasn't all been a walk in the park either. Joe had some family behind him and that included his brothers, his Aunt Jess
and cousin Piper. Not to be forgotten is Joe's best friend Fin.
Not everyone in the community liked him though and Mrs. Howard was one nasty voice.  But he has built a good life for himself.

I also really enjoyed how the brothers did the teased each other with guy good natured ribbing.  One of my favorites has to be when Jack told Joe, " I may love you like a brother, because you are but you have the emotional maturity of a Twinkie."  This is only one of the other things that made me smile in the book. Buzz is another one.  Buzz is Joe's dog who he often jokingly claims the community likes his dog more than they like him.
What a great additional character Mr. Goldhirsh turned out to be. He was a man of Jewish descent who started out life in a Nazi concentration camp in Germany.   Joe observed that he was the most position person that he knew.  And as you read on, you see that he has quite a bit of wisdom that he's not shy to share.
Twists and surprises were woven in a really great way making it a superb book.  It kept me involved every step of the way.  There is an incredible twist toward the end that in no way did I see coming.  Ah, Good!
"I voluntarily read and reviewed an advanced copy of this book. All thoughts and opinions are my own.”
Posted by Flame at 7:48 PM