BOOK REVIEW- Will o’ the Wisp by Lucy Naylor Kubash 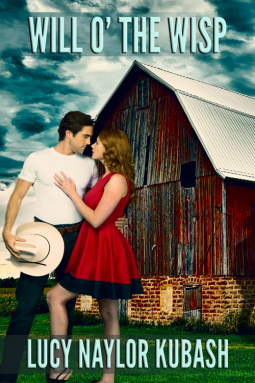 In spite of a broken heart, Allison Delaney carved out a life for herself and her young daughter on her grandparents' farm. Her child and the horses she rescues are all that matter. Then a sudden threat to their safety puts her back in touch with Shane McBride, the man she never thought to see again. Returning to the small town of Silver Creek brings back a lot of memories for Shane, ones he treasures haunted by the ones that made him leave, but this time he is determined to stay and make things right. Trusting Shane may be her only choice, but now Allison fears not only the threat against her farm but the risk of losing her heart again. AMAZON LINK
4 STARS

Alison and Shane have quite the past history.  And not all of it good.  Back in their heyday they thought they would  be together soon and forever.  But then life reared it's ugly head and Shane leaves without even a word to Alison about it. That's gotta sting and it does for a very long time.  She ends up marrying Shane's best friend Jason and life goes on.  Alison is now a widow.  A widow with secrets and more than one danger crowding her. It seemed like she just couldn't seem to catch a break.  One problem after another would crop up.  She did have some friends who helped her when they could.  That was one plus in her life and it included the local veterinarian,  Doc Brewster.
Doc Brewster was someone important to Shane was well.  In his youth the doc was there for him when he desperately needed help.  So now it's Shane's chance to help out the ailing veterinarian.
Lizzie was also an enjoyable addition to the story as another main character.  Lizzie is a very responsible little girl. She's also horse crazy like her mom.  Some of the horses included in the story were rescued horses.  I liked that inclusion in the story.
Things really get more and more twisted as the attacks kept coming.  Add into the mix a dangerous animal that is prowling around.  Make that a four legged animal because there were some dangerous two legged people messing around as well.  One of those people causing problems doesn't get totally revealed until towards the end.  That's something that places Lizzie in unexpected danger.
All in all, a good story that kept tensions high.  If you like romance with suspense this book should do it.  The romance, the re-gaining lost ground, the tenderness and forgiveness leads to a H.E.A.

"I voluntarily read and reviewed an advanced copy of this book. All thoughts and opinions are my own.”
Posted by Flame at 10:55 PM