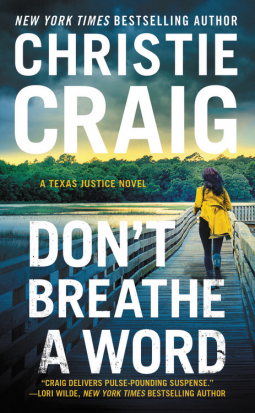 New York Times bestselling author Christie Craig returns with her next heart-stopping romantic suspense about a woman on the run and the man trying to uncover her secrets.
Police detective Juan Acosta doesn't only carry scars on the outside. He's filled with guilt and anger ever since his undercover job led to the murder of those he loved the most. Now he's living for one thing: revenge. That is, until Juan meets his beautiful new neighbor.
Vicki Holloway prides herself on being capable and independent, but her life is turned upside down when her sister Sara is killed by an abusive ex. Fearing for the safety of her niece, Vicki and the little girl go into hiding... resurfacing in Texas with new identities.
Juan finds his once-frozen heart thawing around Vicki, but he knows she's hiding something. Juan needs answers, but Vicki isn't talking. She has to keep her secrets if she wants to keep Bell safe, which means resisting her growing feelings for the sexy, scarred man next door. But when Juan's quest for justice brings danger to her door, divulging the truth might be the only thing that keeps her alive.   AMAZON LINK
5 STAR

Outstanding!
Great characters both the main ones, supporting and even the villains were well drawn.
Speaking of M.C.'s that would not only be Juan and Nicki but also her daughter Bell and Juan's dog, Sweetie.  Sweetie is more of a supporting character and that support is where her story comes in.  Support and comfort as well as cuteness is part of her story.   Bell also adds sweetness to the story.  She is also direct and at times wise beyond her years when it comes to pain and fear.  I can see why she grabs Juan's heart and he desires to protect her.
The emotions and the tension of hiding is well done. It kept the intensity level up throughout the book.  Emotions ranged from fear, loss, guilt, nightmares, trying to recover from tragedies too.  Fear is kind of a weak word for some of the people; it's more like terror.  There is also tenderness that grows between Juan, Nicki and Bell.  I liked seeing how they were drawn to each other and formed a strong bond even before they really realized it.
Juan IS a good guy and the story shows it time and again.  He also works with two other men in the cold case division and they are a tight group.  Connor and Mark show throughout the story how well they work together with Juan.  As a team they have solved supposedly unsolvable cold cases.   They also show how they have Juan's back even as they give him a "hard time" some of the time.  It's a guy thing. Now that this author is on my radar, I want to read more of her stories.  That includes the stories of the men of this unit.

There were a couple of other "stories" or mysteries going on at the same time but be patient the author does a good job of fitting the puzzle together.  It's without getting too confusing either.  It also leads to some really good surprises too.  At least one that I didn't see coming.  I always like that.
That tenderness between Juan and Niki?  It will lead to sex between them but it won't overtake the story.
The story ramps up to more tension before another twist comes up.  Another one that I didn't see coming either.  More information comes out at that time to fill in some of the questions.
A good Epilogue fills in the rest.  Another plus for me is that this book was able to stand all on it's own. That is good because this is the first one that I have read in the series.


“I voluntarily read and reviewed an advanced copy of this book. All thoughts and opinions are my own.”
Posted by Flame at 1:02 PM