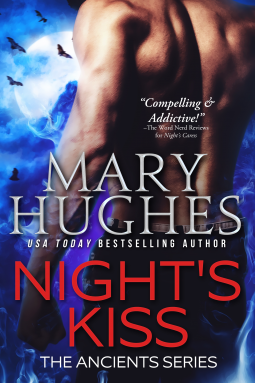 Each book in the Ancients series is STANDALONE:

As a human who hunts vampires, I risk death each night I take to the streets. Bloodsuckers are stupidly fast. I have only my wits, my practice, and my weapons.
Oh yeah, and my rage.
Vampires killed my parents before my eyes when I was young. My revenge? I'll destroy every last one of the evil bastards, starting with their king.
But only one man can help me locate the king. Achingly tall, dark, and too-sexy-for-his-own-good, Ryker is gorgeous enough to be the vamp king himself. But the devilish arch to his black eyebrow, his white, unfangy grin, and rocking the daytime are good clues that he's human.
We’ll have to work together as uneasy allies if I hope to get my final revenge on the king—only now it seems evil monsters are also after our prey, and they’ll stop at nothing to see us all dead. And why are they having so much trouble finding the king?    AMAZON LINK
5++ STARS

WOW, wow, wow! What a great story; a new favorite.  It was so good I hardly know where to start.  But I will try.
Before I even get into the main characters I just have to say that the world building was SO good.
Kat, man I loved that fierce little warrior.  She was going to slash her way through as many vampires as she could.  Yes, she knew that it could end up getting her killed but she had some scores to settle.   The emotions just pulsed through her and erupted into everything around her.  Well, when vamp hunting but emotions dealing with people that involved hugging, not so much.  In fact one of  my favorite phrases had to do with this. It was when Alexis grabbed Kat and hugged her.  "Casual hugging and kissing simply wasn't a thing growing up. So inside, I was Code 3 running hot with all sirens and lights."  Yeah.  That's not to hard to understand at all and continues in the written without being annoying. I liked how the author wrote like that.  I liked the flow and the humor.
Now onto Ryker.  He was a whole basket full of interesting.  I'm treading carefully here though because he was one surprise after another.  I don't want to say too much and ruin it for other readers.
Even most of the secondary people in the story had depth, helping round out the story.  Kat's sister Rey will add important pieces to the story as well.
Battles?  Oh, yes there will be more of those too. Good vs Evil for sure, Intense battles.  More times than not Kat isn't totally convinced exactly where some people fall in those categories.  It causes quite the struggle within her.  Especially when it comes to Ryker.   She really didn't want to even be around him let alone like him.  Too bad because a romance does develop. Just probably not like your usual run of normal romance.  But definitely enjoyable.  Even though there were tensions and troubles, this story also made me smile a lot.  A lot of it coming from these two main characters.
It comes to a satisfying ending.  But I also think one particular enemy wasn't ended quite yet.  Sounds like another book just might be in the future.  If it is, sign me up.

I voluntarily read and reviewed an advanced copy of this book. All thoughts and opinions are my own.”
Posted by Flame at 1:08 PM