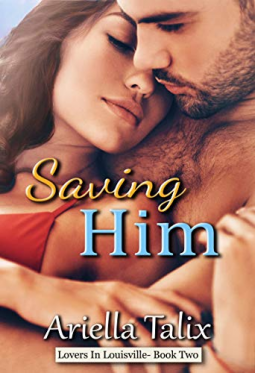 Adult themes and hot, sexy scenes are intended for mature readers only.

Sparks fly, but so do bullets.
Sibley Xenopoulos has more attractive, successful men vying for her attention than she has the time to deal with. But she's only ever had eyes for one—Private Investigator, Leo Spanos.
If ever a man needed saving, it’s Leo.
His life is in terrible danger, and a bad, BAD man is on the loose. Leo positively craves Sibley, but he's convinced that being involved with him could ruin her life in more ways than the obvious.
Set in Kentucky, the second installment in the Lovers in Louisville series is full of local color and drama. Sibley runs a bed and breakfast in a Victorian mansion located in Old Louisville, and Leo is back in town after a three-month gig out of state. His investigation business is booming, but he needs to somehow stay out of trouble.
AMAZON LINK
4 STARS


An interesting mix of innocence and shy sweetness; well at least at first.  Leo is so crazy about Sibley right from the start.  He's so crazy about her that so many different times he acts kind of crazy. No, not dangerous crazy but more like self-sabotaging crazy.  He feels like he just can't offer Sibley the kind of life that she so deserves.  As the story unfolds it easier to understand where those fears are coming from.  And there are some legitimate reasons.

Sibley, has had her eye on Leo for quite some time.  And that was before he went to California on a job and his image was transformed.  Sibley was beginning to despair of ever really getting him really interested in her.  She just didn't realize how he already felt.  There were a lot of mixed messages going on.  Even after they moved on in their connection there were more times when their messages got mixed.
Leo was trying to keep Sibley out of the danger that was surrounding him.  The "bad man" was dangerous but also clever and ruthless.  He keeps things stirred up as he runs circles around law enforcement.
This story had some interesting secondary people in the book. That includes the main characters best friends, Gunnar and Ase.
There are surprises coming up as the story works towards the end.  I have to say the language twist was something I was NOT expecting.  You'll have to read the book to figure that one out.
I will say that I liked some parts of the story more than other parts.  Some of it did slow the story down  but overall I did like it.
Epilogue was well done.  It tied up more ends of the story with it's look into the future too.

"I voluntarily read and reviewed an advanced copy of this book. All thoughts and opinions are my own.”
Posted by Flame at 5:57 PM