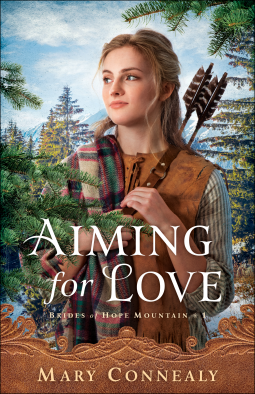 Josephine Nordegren is one of three sisters who grew up nearly wild in southwestern Colorado. She has the archery skills of Robin Hood and the curiosity of the Little Mermaid, fascinated by but locked away from the forbidden outside world--a world she's been raised to believe killed her parents. When David Warden, a rancher, brings in a herd much too close to the girls' secret home, her older sister especially is frightened, but Jo is too interested to stay away.

David's parents follow soon on his heels, escaping bandits at their ranch. David's father is wounded and needs shelter. Josephine and her sisters have the only cabin on the mountain. Do they risk stepping into the world to help those in need? Or do they remain separated but safe in the peaks of Hope Mountain?   AMAZON LINK
5 STARS

This was a powerful story that I really enjoyed. It also had great people in the story too.  Jo and her two sisters all on their own had lived quite the unusual life.  And they had lived on their own for at least a decade.  The outside world was just that, outside.   The three sisters depended on each other and their skills to survive in a harsh world that they loved. Ursula, the oldest sister mainly kept things in their home safe.  That doesn't mean that she didn't have any skills outside the home though.  It's just that they each had their specialties.  The youngest sister, Ilsa's specialty is being like a medicine woman.  She's no slouch in the woods either though.   Jo was the hunter who kept them stocked with meat. It was interesting to read how attuned these three women were to nature and how they had pretty much run wild on that mountain top.
When Dave and his family show up, they add a whole good but different dimension to the story.  So does the attraction that grows between Dave and Jo.  This is a clean story with no love scenes but a deep abiding respect for God in both families.
I gave this book a 5 STAR rating even though not all of the problems are solved. There is a lot of action going on that keeps things interesting.  There is also a few threads left hanging but the story was so rich I just couldn't give it any other rating.  A couple of those things not resolved yet had to do with recovering the Warden ranch, Wax Mosby, and Ursula to mention a few.  I have to say that I'm really interested in finding out more about how Wax Mosby is going to figure in.  Why?  Because it seem that this famous gunslinger has some things changing inside him.   And I want to see how that plays out.

“I voluntarily read and reviewed an advanced copy of this book. All thoughts and opinions are my own.”
Posted by Flame at 9:56 AM