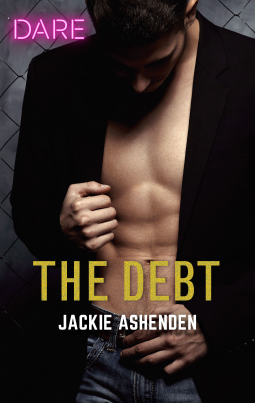 Ruthless billionaire Ash Evans finds the sexiest way to collect on a debt in the first installment in The Billionaire’s Club quartet!

Notoriously ruthless property developer Ash Evans never forgives a debt. And I have two days to convince the former street fighter not to pull his investment in my father’s company. Taking a job as his chauffeur in Paris is the only way to get close enough to ask the bad-tempered billionaire for a favor.

With his sexy tattoo, scars and magnificently cut body, he’s as powerful, sleek and difficult to manage as the sports cars my family designs. And after meeting his electric-blue eyes in the rearview mirror all night, I’m more than happy to rev his engine and take the boss for a ride!

But now Ash thinks I’m just using him to get what I want. And he’ll give me what I need, but there is a price—posing as his girlfriend to help him exact vengeance on his half brother. Pretending to love Ash is the easiest job I’ve ever had…and soon my heart is racing into danger. Will a man so full of anger ever be capable of loving me back?    AMAZON  3 STARS

This was a really emotional story.  Intensely emotional when it came to both of the main characters.
It was also sensual, steamy and kind of erotic.  Especially in the semi- voyeur scene, which I wasn't expecting.
I forgot that the "Dare" inclusion on the eBook cover was the remember that it was going to be of a higher sexual content.   The information about this kind of series said that it had strong characters (it did) and highly explicit sexual encounters (it did).   For me, I didn't enjoy that as much since it was in the danger zone of taking OVER the story.  That is something that I don't like.  I can't say it wasn't well written but it's just not my style.  Quite a bit of language as well including one of my least favorite "F" bombs.
Now to get to some of the things I did like.  Ash was an angry man and he had plenty of reasons to be that way.  He was a man who had to fight for any and everything he ever wanted.  I liked that he was complex.   Anything nice about him he tried to keep hidden and there were some people that he cared about.  But he could list those on one hand.  Anybody else got the street fighting steamroller part of this personality if they didn't get out of the way first.
Ellie Little was more than a match for Ash.  Because even in front of a steamroller she's not going to roll over and play dead.  She is a fighter also and loves a challenge.  That's something that they both have in common.   And she intrigues the heck out of Ash and she finds that she returns the favor.  She's not put off by him or his scars.  It makes for some interesting interactions.
The book comes to an expected conclusions of some challenges that have been plaguing Ash.
Some of his anger issues get resolved, even though we know he will never be an easy to get along with man.  He's not tame but there is a H.E.A. for Ellie and Ash.

“I voluntarily read and reviewed an advanced copy of this book. All thoughts and opinions are my own.”
Posted by Flame at 9:37 AM