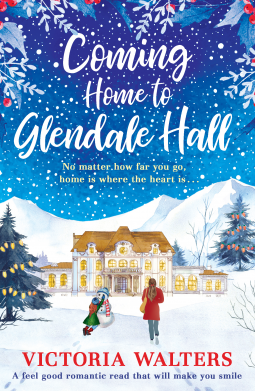 No matter how far you go, home is where the heart is...
Beth Williams hasn’t been home for ten years. After falling pregnant at sixteen, she ran away from the imposing Scottish estate where she grew up rather than risk her family’s disapproval, working hard to build a life for herself and daughter Isabelle - but now she’s finally returning to Glendale Hall.
As Beth tries to mend her broken family ties, and fights to bring the community of Glendale back together, she realises that the story she has told herself for a decade might well be a very different one from the truth. Even though she ran from Glendale it has never left her heart. And, she soon realises, neither has Drew – Beth’s first love.
Will Beth be able to forgive her mother and grandmother (and herself) for what happened ten years ago? What will Drew say when he discovers the secret she’s been keeping from him for so long? Can a festive trail bring the village back together?
Will Christmas work its magic on Glendale - or will Beth be forced to run away from it all over again?   AMAZON LINK
3.5 STARS

This one was a hard one for me to rate.  Although it was a good, clean story with interesting people.  And it was a good Christmas story, it also felt like one realllly long story.  It felt like it went a bit too long at least for me.  It could have cut quite a few pages and still could have been a good story.  Also the romance/non-romance between Beth and Drew got old for me after a while.  If they got interrupted one more time as they started to really begin to communicate, I was going to scream.  I actually felt like Drew was a nice guy but he also came across as kind of weak.  That was something that I didn't like.
There were several issues that got hammered on over and over again that just was repetitive and slowed the story.
On the up side of the story, Beth's daughter Izzy was a good cast choice.  She was well written, charming and also strong minded.  Another really good person in the story was Heather, who was an old school chum of Beth's.  It wasn't very hard for them to re-connect and have each other's back either.
This was an emotional story with secrets that had been held for years coming out.  There were secrets from her grandmother and even her mother and father.
I did like how the village pulls together and some unique ideas come out on how to save it.  And Beth is leading the charge.  The story has a really good ending and that part I did enjoy.  There was a lot of hope for the future for the main characters as well as some others.