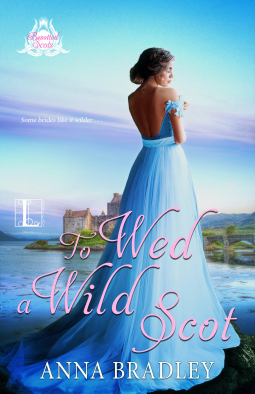 A single lady of birth, beauty, and large fortune should not have this much trouble making a match. Yet after two failed betrothals, Lady Juliana Bernard is in a bind. She must find a husband at once or lose guardianship of her beloved niece. Her childhood friend, the Duke of Blackmore, is her last, best hope. But once she tracks him down in Scotland, she receives startling news: the duke is already engaged.

There is one other option. The duke’s scandalous brother, Logan, Laird of Clan Kinross, is to blame for the mix-up. The least he can do is marry her to make amends. Wooing does not go well at first. But just as Juliana begins to welcome the boisterous but tenderhearted Scot into her life (and her bed), secrets come between them once more. And it will take a determined husband indeed to ensure that a marriage begun in haste leads not to heartache . . . but to love.
AMAZON LINK
3 STARS

When I saw the beautiful eBook cover and read the book information I had high hopes for the story.  Unfortunately it didn't quite get there for me.  Even though I liked the main characters, it was kind of slow for quite a few times.  It did have some good moments as well but just not enough for me to get really pulled in and stay that way.
I did like that Juliana had a determined, strong part to her that the situations (and Logan) forced to the forefront.  She was a tiny, beautiful woman seen by many as decorative; a "diamond of the first water". She'd even begun to believe it herself until her intense love for her niece Grace is more important than anything else.  That fierceness leads her to quite the adventures.
Logan has his own brand of fierceness.  He also had a stubbornness that often causes him "to cut off his nose to spite his face."  It's a good thing that he also has many good qualities as well. One of them is that like Juliana when he loves he does it fiercely. He fiercely loves the people of his clan.
There is several good secondary people in the story.  Some even added a bit of humor.
On the downside, it felt like a bit too much described marital sex.  And there was fair amount of the Scottish phrases thrown in.  After a while I stopped looking them up although the author had included a Gaelic Glossary in the back of the book.
“I voluntarily read and reviewed an advanced copy of this book. All thoughts and opinions are my own.”
Posted by Flame at 1:10 PM