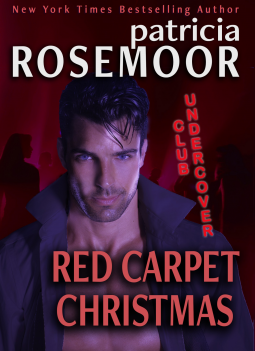 No cover charged... no ID required... safety guaranteed...
No one knows club owner Gideon Maddox’s real identity until the woman he’d once loved walks into the Red Carpet Christmas fundraiser at Club Undercover. He hasn't seen recent widow Simone Burke for nearly two decades—since he testified to put her father in prison for killing his own father. The star-crossed lovers never forgave each other, but suddenly Simone needs his help—and Team Undercover—to prove she is innocent of a yuletide murder. Clearing Simone could reignite the past and a forbidden passion that still burns between her and Gideon, but she can’t let him discover the secret she’d kept hidden all these years. AMAZON
3 STARS


This is a story that I have been waiting for as I read some of the other stories in this series.  Gideon has been quite the man of mystery all along.  That he helped people wasn't a mystery though.
What about Simone?  I found it pretty hard at times to like her.  Oh, I got how some things had changed her even understood some of her reasons but she's so rude to Gideon. And she keeps it up for quite a while and after a while it felt a bit juvenile. Hey, he's a good guy and I didn't appreciate that.  At times I even felt she was kind of stupid.  It's like, you are a high level suspect in a murder and you are going to fight against his help?  It's not the only stupid thing that she does that has me shaking my head.
Of course reading both of their P.O.V.'s helped make me side even more with him.
The Undercover Team was there and they helped but they were more in the background this time around.
Although, this book wasn't my favorite, it does have a fair amount of action and comes to a startling conclusion.   It has more than one twist too!

I had high expectations for the reveal into Gideon's life and didn't feel like it met all of them.  Still, I have liked other books by this author and will still be looking for them.