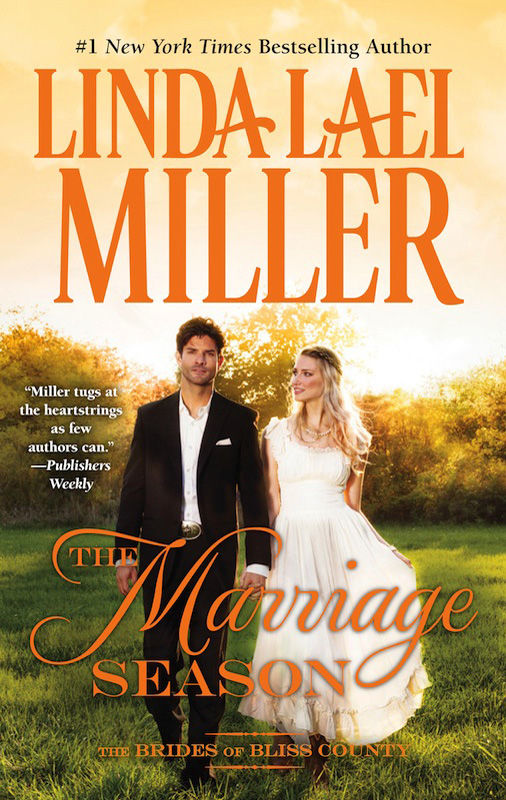 Since Hadleigh, Melody and Bex—the best of best friends—entered into a marriage pact, two of them have found (and married) the men of their hearts. But Bex doesn't think she'll be as fortunate as the others. Her own first love died years ago in a faraway war, and Bex has lost hope for a happy marriage of her own. She concentrates on her business, a successful chain of fitness clubs, instead.

Then, when single father Tate Calder comes to Mustang Creek with his two sons in tow, who befriend Bex's eight-year-old nephew, she and the handsome, aloof newcomer are constantly thrown together. But is the marriage season over? Or can a man with doubts about love be the right husband for a woman who wants it all? AMAZON LINK
4 STARS

I  liked this one.  Both main characters Bex (Becca) and Tate had their share of baggage.  But they were both "good guys".  No matter what hurts that they both had gone through,  they were there for people that they cared about.  Josh was Bex's nephew, who she loves dearly. She is probably closer to him than her sister Tara.   Tara leaves her husband again for cheating and the brunt of care for Josh falls on Bex.  She's over her head but she is willing to do what she can to protect and nurture him.
She does care about Tara wants to help her too but she can't make the decisions about her marriage for her.
Individually I found them both pretty interesting. It was also good to hear both sides of their P.O.V's.  Tate, had a lot of things about his personal life, his dead wife that no one else knows about.  They come out slowly but in a good way.
I liked the friends that Bex had since early childhood and the bond that they shared.  Something that made me smile was how the three of them were described by Tripp when Tate asked for some advice about how to handle things with Greg (Tara's husband)   .  "Bex was born to fix the world.  Accept it.  Melody will stylishly decorate it. Hadleigh will the the queen-slash dictator and everything will be under control. Let them handle it.  Greg won't stand a chance."   Man, I loved that!
Tate's high-powered father was something else, always trying to micromanage things especially his son.  He wasn't bad necessarily, he just wasn't happy with some of Tate's decisions. Tate gave up some things/some opportunities though because time spent with his sons was more important than the high income he used to get.  Besides, he had a dream.  I also got a big kick about how smooth Tate became almost like a stuttering teenager around Bex.  By his own admission.
A fun twist was when Tate's dad and Mrs. A (both successful, powerful people) butt heads.  The ending was a good one.
Posted by Flame at 6:56 PM