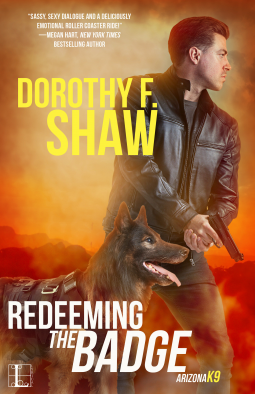 SHE WAS ALWAYS THE GIRL OF HIS DREAMS

In high school, she was the girl most likely to live happily ever after—rich, popular, beautiful…and maybe just a little mean. But Heather Winters’ dreams of marriage and motherhood haven’t worked out as she hoped. Now she’s back in Arizona, trying to reinvent herself. She knows what she doesn’t want: a serious relationship. She doesn’t remember Robert Caldwell from high school, but the good-looking K-9 officer is everything she’s looking for in a short-term fling.

A routine traffic stop brings Rob face to face with the girl who fueled his teenage fantasies—and she’s even more ravishing than ever. The former homecoming queen didn’t know he was alive back then. Now she’s changed—and she’s hurting. Despite how great they are together in bed, Heather isn’t letting him anywhere near her heart. But he’s got a plan—and with a little help from his canine partner, Tricks, he’ll show Heather that together, they have all the happiness they’ll ever need…
AMAZON
3 STARS

Man, this book was NOT what I was expecting!  I also felt like although the book had potential that it didn't totally get there.  At least not for me.
On the bright side,  Heather, and Rob were good main characters.  Even Tricks added to the story.  It had a few good moments but I like my story a certain way.  I don't mind a small amount sex scenes built around the story.  But I really don't like it when the sex scenes seem to be the main focus with a small amount of story added.  I began to feel like I was reading erotic material; not what I signed up for. I'm sure that the scenes could be considered well written but after awhile, I found myself flipping through those rather quickly.  And I feel like I got that  along with quite a bit of swearing.  I don't think I've read a book in quite a while that was so filled with the *F bombs.  And that wasn't the only language bomb.
Towards the end it did get more personal dealings with emotional issues.  That part WAS good and I liked that Rob was always there for her.

“I voluntarily read and reviewed an advanced copy of this book. All thoughts and opinions are my own.”
Posted by Flame at 8:24 AM