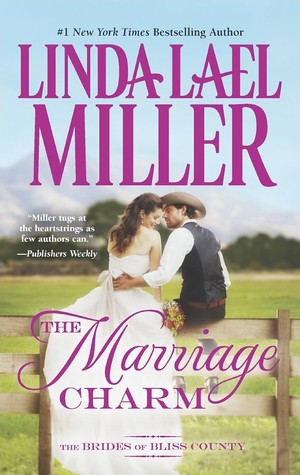 The women of Bliss County have a pact—to find husbands. The right husbands.

One already has: Hadleigh Stevens, who married rancher Tripp Galloway a few months ago. Now Melody Nolan thinks it's her turn. Melody has recently found success as a jewelry designer, and her work is the focus of her life. She's not exactly unhappy, but she wants more. She's always been attracted to Spence Hogan, the local chief of police, but she's convinced that Spence, a notorious charmer, isn't what you'd call husband material.

Spence is a good cop who isn't scared of anything—except love. And he's done everything he can to preserve his reputation as a womanizer—a reputation that keeps marriage-minded women, including Melody, at bay. And yet…there's something about Melody he can't forget. Something his heart can't ignore.  AMAZON LINK
3 STARS

Pretty predictable but with at least one twist.
Although I liked the main characters, and the community I can't say that this book really lite a fire under me.
There were some unique secondary people in the story.  But front and center were the other two best friends of Melody's.  The women who were all together in the pact and had each others backs.
One thing I will say about Spence is that although he was a good guy, he suffered from a typical problem.  Foot-in-mouth disease.  It mainly showed up when around Melody.  Without meaning to, if there was ever a way or time NOT to say something?  He found it.
There was a good small town feel to the story.  One that reminded me a bit of some of Susan Mallery's stories but with maybe a bit more depth.

You're going to want to watch the new guy in town named Tate.  There were some hints about a possible attraction to a particular woman in Bliss County.
Posted by Flame at 5:57 PM