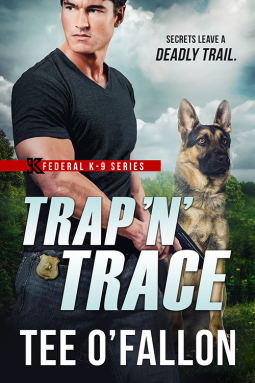 For wealthy socialite Katrina Vandenburg, business meetings and charity galas are all part of her orderly, structured world—one that gets blown to hell after finding two dead bodies in the same day. The police think she was in the wrong place at the wrong time. FBI Special Agent Dayne Andrews thinks otherwise. Dayne and his K-9, Remy, are tracking a cold-blooded killer, and that trail...leads straight to Kat.

Kat and her rescue shelter—the Canine Haven—are the only common denominators between the murders, and Dayne is convinced she’s dead center in the killer’s sights. Protecting her will test every ounce of his steely resolve. She’s the most intriguing woman he’s ever met. And everything he shouldn’t want. Too bad neither of them seem to have gotten the memo.

And they need to focus on catching a killer now more than ever. Because if Dayne and Remy fail in their mission, nothing will stand between Kat and the killer’s deadly blade. AMAZON LINK
4.5 STARS

I really liked and enjoyed this story.  The opening chapter starts out with quite the surprise of Kat and the reader.  It goes all in right away. It's also part of how Kat met Angus.
I liked that Kat was the one with the zillions of dollars, and business and charity authority and demands. It made the challenges that they faced different from a lot of books.
Let's talk about Katrina (Kat) Vandenburg first.  She has been born into incredible wealth and huge responsibilities.  While her parents were alive she knew what a loving family was like. Also she had seen some of what a loving marriage looked like too.  You can see after awhile that Kat really has two sets of friends.  Emily who is Kat's personal assistant and one of her best friends, is one of those true friends. It takes her a bit of time to realize  there is really only one set of true friends.  That will keep her busy as she tries to stay alive with the help of F.B.I. (K-9) Agent  Dayne Andrews.

Now we get to Dayne Andrews.  He was great at his job and you can see how different the worlds that they come from are.
Dayne has a lot of preconceived ideas about Kat and part of that comes from the fact that she is outrageously wealthy.   And he would describe himself as having coming up from the streets.
The relationship that Dayne had with his canine partner Remy was a pleasure to watch.  So was the interaction of Remy and the puppy Angus. It added charm, fun and smiles.
The title for this this book was interesting and as the story goes on you get a better idea of why it fits so well.
Over all this book has all the good main characters, emotions, action, mysteries, dangers,  romance and some spicy heat that you could hope for.  Oh yes, and some good adjustments to make for a H.E.A.  which shows in the Epilogue.


"I voluntarily read and reviewed an advanced copy of this book. All thoughts and opinions are my own.”
Posted by Flame at 5:07 PM